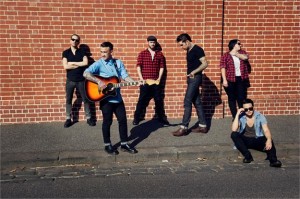 KING CANNONS are flying high right now, just returning from sell out shows on their exclusive album launch tour across the East Coast.

The new single is the title track from their debut album and is the defining moment of KING CANNONS formative years.  KING CANNONS debut album “The Brightest Light” was released in June in Australia, New Zealand, Germany, Austria, Switzerland and The Netherlands with some strong chart placements including a #12 debut in New Zealand.

“KING CANNONS are one shake rock, two parts retro soul and 100 per cent proof that they are the real deal.”
The West Australian June 2012

August, September see’s KING CANNONS bring their stunning live show to an extensive run of gigs with an incredible line up.  The main support in VIC, SA, NSW & QLD is UK lads, ALL THE YOUNG bringing their anthemic rock show to our shores for the first time.  Think Oasis meet’s The Jam and you are on track for what to expect for the live show from one of the hottest new rock bands in the UK.  Melbourne roots rockers THE HELLO MORNING will be opening support in VIC, SA and NSW.  Kiwi punkers TRANSISTORS kick off on the Gold Coast and Byron, CANNONS old mates THE STRUMS share the stage with them on the Sunshine Coast.

** All The Young Not Appearing

Read our review of ‘The Brightest Light’ here…