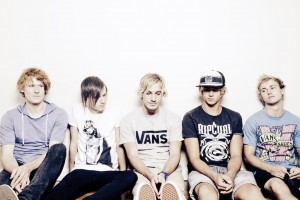 Gold Coast rockers Nine Sons of Dan have, today, released “She’s So Fine” as an exclusive iTunes bundle packaging the single and a bonus never before released acoustic version of the track. The five-piece will also release their debut EP “Landslide” to radio and retail in North America on January 16 2012.

In Australia, “She’s So Fine”, which features Paramore guitarist Justin York, was the #1 most added track to radio (W/c Dec 3) and debuted at #30 on the national radio airplay charts.

Their debut EP “Landslide”, featuring the singles “Cities” and “She’s So Fine”, will also be released to media and retail in North America on January 16 2012.

The band has recently entered the studio to record their follow up EP due for release mid-2012 with US music producer J.R. McNealy (Anberlin/Paramore/Emery/Underoath) behind the helm. The band’s first single from the release will drop in the first quarter of 2012.

Check out our interview with Nine Sons Of Dan right here…

Check out our review of the “Landslide” EP right here…