TOMMY EMMANUEL to return for national tour May 2023 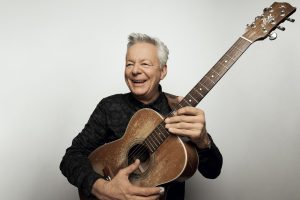 Australia’s internationally acclaimed acoustic guitar icon Tommy Emmanuel CGP will return to Australia in 2023 for a major national tour – his first here in four years!  He will undertake a packed three week national tour, including headlining the renowned Blues On Broadbeach festival on the Gold Coast.  Tickets go on sale to the general public from Friday 25 Nov via tommyemmanuel.com

Tickets on presale from Tuesday 22 Nov and on general public sale from Friday 25 November
(*Melbourne Hamer Hall show on general sale from 10am, Mon 5 Dec)

“I am so happy to be finally able to come back to play my beloved Australia. It’s been a tough time in our world lately, and I find that music is needed more than ever. Since I’ve been back touring again, I sense a new feeling of JOY that people have for the live experience, just like the old days when people hear you play for the first time. It’s an awakening, a reminder of the beauty of music – seeing, feeling, and experiencing an event filled with truth, love, sacrifice, dedication and letting go. Relax, let it all go, come and have fun!”  – Tommy Emmanuel, CGP

Tommy Emmanuel brings the power and dynamism of a full band to his solo acoustic playing, with incredible charisma, stunning speed and dexterity and unerring command of melody.

Tommy’s message is pure love for the guitar and the music and his delight in sharing it with the world, one audience at a time. Tommy’s greatest honour was being named by his childhood idol Chet Atkins as a ‘Certified Guitar Player’ (CGP). The legendary US guitarist and producer Atkins gave this designation to only five players in history. In 2010 Tommy Emmanuel added AM to his name after CGP, when he was appointed a Member of Order of Australia for services to music.

Alongside his rare CGP honour Tommy has received a huge variety of accolades, including two Grammy Award nominations, three ARIAs, three Golden Guitar awards and being twice voted Best Acoustic Guitarist by US Guitar Player Magazine.  Tommy recently added yet another accolade to his vast collection, having been named number one acoustic guitarist in the world on Music Radar, as voted by his fellow musicians.

Don’t miss this chance to see Australia’s most successful guitar export: Tommy Emmanuel Live in Concert, touring Australia in May 2023