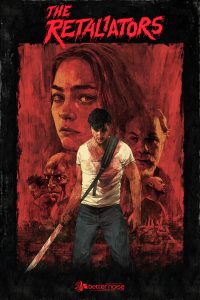 Horror-thriller feature THE RETALIATORS, from Better Noise Films, co-producers of The Dirt, and US distributor CineLife Entertainment, alongside international distributor Trafalgar Releasing, are releasing the independent feature film in an unprecedented 445 screens in the USA and over 500 theaters internationally simultaneously. Including all Australian capital cities.

Garnering a 100% rating on Rotten Tomatoes during its film festival run across the most prestigious horror film festivals, the film centers on an upstanding pastor, who uncovers a dark and twisted underworld as he searches for answers surrounding his daughter’s brutal murder.

This 2021 ScreamFest opening night film takes audiences on a riveting and bloody revenge mission with a unique blend of 80’s action/horror and crime genre influences. It begs the question, if you could have a minute alone with the person who killed your loved one…would you take it?  Michael Lombardi (“Rescue Me”), Marc Menchaca (“Ozark”), and Joseph Gatt (“Game of Thrones”) headline the cast alongside Jacoby Shaddix, front man of Papa Roach, making his acting debut.

Original soundtrack music featuring songs from artists appearing in the film, will be available from Better Noise Music on September 16. The soundtrack is led by the Mötley Crüe track “The Retaliators Theme Song (21 Bullets)” co-written by Nikki Sixx and James Michael of Sixx:A.Mf and featuring Danny Worsnop from Asking Alexandria, Spencer Charnas from Ice Nine Kills, and Matt Brandyberry from From Ashes to New released August 5. Four singles from the film have reached #1 on Rock Radio since 2020, including: Papa Roach’s “The Ending,” Five Finger Death Punch’s “Darkness Settles In,” All Good Things’ “For the Glory featuring Hollywood Undead,” and Bad Wolves’ “Lifeline.”  Download press kit below for full list of music credits in the film.

In addition, the US summer tours for Mötley Crüe, Asking Alexandria, Five Finger Death Punch, Nothing More, The Hu, Papa Roach, Bad Wolves, and Eva Under Fire also featured marketing tie-ins to the film to grow and promote the horror genre within the audiences of music fanatics attending the concerts.