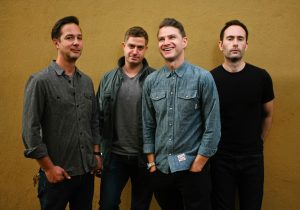 Pop-punk luminaires American Hi-Fi have just revelaed their new covers EP ‘Anywhere Else But Here‘. This follows on from the release of ‘Another Nail in My Heart‘, their third cover release this winter, following recent reimaginings of Madness‘ ‘Our House‘ and Joe Jackson‘s ‘Steppin’ Out‘.

Frontman Stacy Jones shares: “We chose them because this is the music that we grew up on. These are the artists that made us want to pick up drum sticks, plug in a Jazzmaster, and make a fucking racket with our best friends until the neighborhood shut us down.  And that tenet still rings true today.  American Hi-Fi has always been a family affair.  A brotherhood. Now, more than ever, I appreciate the value of family, of music, of nostalgia, of coming together and sharing the joy of a song that can transport us, even for a moment.”

American Hi-Fi are an American pop-punk band made up of vocalist Stacy Jones, guitarist Jamie Arentzen, bassist Drew Parsons and drummer Brian Nolan. The group released its eponymous debut album in 2001, and this led to their hit single ‘Flavor of the Weak‘. After a successful tour, they released the live album ‘Rock N’ Roll Noodle Shop: Live from Tokyo‘ and then the full album ‘The Art of Losing‘, in 2002 and 2003 respectively. After this, the group was dropped from their label, Island Records, and moved to Los Angeles to remake their production and sound. Working with veteran music producer Butch Walker, they released ‘Hearts on Parade‘ in 2005. The band then toured to a widespread fan-base in Japan and in the United States. Finally, the band came back after five years of interval, releasing their fourth studio album ‘Fight the Frequency‘ in August 2010.

In 2014, the band returned with ‘Blood & Lemonade‘, American Hi-Fi’s fifth full length out on European label Rude Records. Featuring the single ‘Allison‘ and other notables ‘Golden State‘ and ‘Armageddon Days‘, the record wholly embraced the sound and spirit of classic, balls-to-the-wall, guitar rock mixed with the power pop sensibilities that lead to their worldwide smash ‘Flavor of the Weak’.

To celebrate 15 years of activity and 15 years from the release of one of the milestones in pop rock history, American Hi-Fi got back in the studio to track an acoustic version of their debut album. The band recorded at Sunset Sound, the legendary studio in the heart of Hollywood where such acts as Social Distortion, Van Halen, Led Zeppelin, The Rolling Stones, Rancid, and Tom Petty have all recorded. The result is the aforementioned ‘American Hi-Fi Acoustic‘, a re-work of the thirteen songs compiling the original album with a new, fresh, acoustic spirit.

‘Anywhere Else But Here’ is available worldwide now through Rude Records 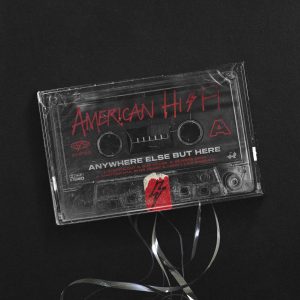