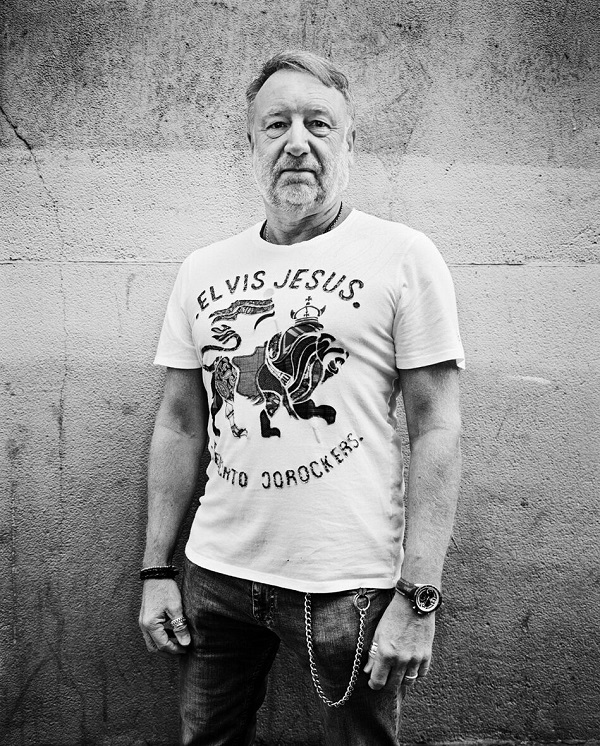 “So I think that people to be honest with you are going to be very surprised, but it isn’t a million miles away from the group, it’s a thousand miles but it’s not a million.”

From Release: “Peter Hook & The Metropolitan Orchestra present Joy Division Orchestrated” celebrates one of the most influential bands ever and put that group’s most famous works in an immersive show that recognises their role in shaping popular culture and the influence they continue to hold. The show is curated by Peter Hook acting as Executive Producer with Musical Director Tim Crooks taking care of the orchestration. The concerts are the first time that an original member of the group has taken part in such a project to remember its decisive back catalogue. “Orchestrated” pairs up musically the elements of post punk that characterised Joy Division’s ground-breaking sound with the orchestra, paying homage to the spirit which defines their heritage.

While at home watching The Walking Dead we gave Peter Hook a call to talk about his return to Australia for the Joy Division Orchestrated tour, how it came about, the past, the future, and more…

You’ve toured Australia many times, this time with ‘Orchestrated’, what was the idea of bringing this show to Australia?
Well I got asked primarily, the promoter that we’d worked with over the years heard the fact that we were doing the Royal Albert Hall in July and he came on and wanted to be the first one to really bring it to Australia. Now Australia to New Order because Joy Division never made it has always been fantastic, we’ve always had a wonderful time there, we’ve had a wonderful reception and we were actually really big in Australia *laughs* and it was wonderful, we had a wonderful Australian record label as well, Factory Australia. So we’ve always been looked after, I can remember the guy, Andrew Penhaligon wonderful bloke and really looked after us every single time we’ve been there we’ve had a fantastic time. Every time I’m bored in the plane I’m always why am I going back to Manchester? *laughs* but when I get here it’s my home and I love its bad side and its good side and I must admit I’m very much a product of Salford and Manchester so yeah, we’ve always had such a wonderful time from really early you know I think the first tour of Australia was with the guys that used to do Big Day Out, it was their promoters first international band, we were the first international band that they’d ever done and they went on to be huge as an agency I’d like to think with our help *laughs*. So we’ve always had a fantastic reception when we’ve got there and we’ve always absolutely loved it, so it’s an easy thing to do. So to get asked to do it as we were when I started playing with The Light, we played our seventh gig in Melbourne and got a fantastic reception and a wonderful tour which made me realise that I’ve made the right decision to start playing Joy Division’s music. So yeah it’s just an absolute compliment to be asked.

In putting the show together what was the process like looking back at these songs and arranging and orchestrating them?
Well the interesting thing is that I’ve worked with the conductor for three years, this is our fourth year together, so I’m well used to what Tim Crooks actually does, isn’t that interesting I’m bringing another crook to Australia *laughs* I’ll have to watch that gag. I’ve listened and watched what he’s done and he does a wonderful job of a lot of these one hit wonders, these dance tracks he does a wonderful job with them and he lifts them to a different dimension, he really does and I’m a fan of these tracks and I’ve grown up with them my whole life, you know every christening, every wedding you always hear these tracks ‘You’ve Got The Love’ etc, etc they become an important part of your life and he does the treatment on them and he kept saying to me I’d love to get my hands on Joy Division. I was like in your dreams man, no chance, I couldn’t see the correlation at all but I must admit over the four years and he kept saying to me over the time that we should do a Joy Division one. Now the others have done it, New Order have played Joy Division orchestrally in Australia and so it has been done before but obviously this is my interpretation. So I let him have his head we sat down, the group played, he did some treatments on top of it and they were wonderful. I must admit over the years I’ve been listening to cover versions of Joy Division and New Order some of them are good, some of them are bad and some of them are great. The thing is the ones that I’ve heard that I think are great I’ve taken the qualities and the ingredients of what those people have done and simplicity actually is the word and I’ve been able to put that into Tim’s interpretations. So I think that people to be honest with you are going to be very surprised, but it isn’t a million miles away from the group, it’s a thousand miles but it’s not a million.

The thing is that I didn’t want this to be some jazz experimental odyssey art type of thing or some mad gothic the way that if you listen to a lot of the orchestrals on the internet they’re very gothic, very dark, they seem to go down the very dark side of New Order. I’ve tried to make it more evocative, quite melancholy but also uplifting, you know Ian’s is a tragic story, Joy Division’s is a tragic story, they finished literally just as they were starting, so there’s the frustration and the awful predicament of wondering what they could’ve gone to, what could Joy Division have achieved if Ian would have lived? So there’s a real tragic aspect to it, and I mean suicide is a terrible thing for the people left behind even when they aren’t successful and culturally significant as Ian, I’ve lost many people that have not made a dent in the world the way that Ian did but my god you still miss them and you’re still frustrated and angry and you still have to suffer the pain at the way that they decided to leave you. So there’s always that cloud shall we say over our music, but I think that the success that we still have musically now is amazing, the effect that Joy Division has on young people when they hear it, it becomes and important part of their lives. so the wonderful thing is there’s still a celebration to Joy Division which is what I’m hoping to bring to everything, the interpretation that Tim has done to the songs I think is wonderful, and it’s well worth a chance, it’s well worth a punt as we say in England for anyone who liked Joy Division.

Were there any songs that you thought would lend themselves to an orchestra but didn’t in fact work out?
It was usually the opposite, it was the ones that you didn’t think would lend themselves have and its quite interesting because when all said and done it’s just a cover version and this is my interpretation and my cover version if you like of Joy Division, but the thing is there’s just different aspects, but the grandeur or it, the grandeur of the sound that I’ve watched with the Hacienda classical it’s what I’ve come to love and I must admit that Tim has delivered 100% and you will find no happier person on the night than me and that’s all that matters.

Now you’ve been in the business for a while, and it can be easy to say what’s changed in that time but what for you is the one thing that’s stayed the same in your time making and performing music?
The one thing that’s stayed the same for me is the excitement and the satisfaction of playing your own music to people who love it as much as you do and when I come off stage I could kiss every one of them because they’ve given me a fantastic life I must admit. I realised that recently actually, when we reformed to play Joy Division I had no relationship with the other members of Joy Division and very sadly I can still say that today. The thing is to get my own music back after thirty years of not having it was the wildest feeling and I don’t take it for granted, every time I go and play I’ve been fighting with the others so much and every time I got and play I realise how lucky I am to have that freedom and how lucky I am to be rewarded by people coming through the door who are just like me, mad Joy Division fans and together I think we do create something absolutely wonderful which after forty three years I always have that feeling that someone’s going to make me go back to work *laughs* I’m thinking oh god I hope it never happens. I think I’m probably a bit safer now at 63 but I keep thinking someone’s going to march in and go “right, you, back to work” and I’m like oh shit because I’m having such a great time, I mean we’ve toured Australia ten times now, had a wonderful time and a wonderful reception and Australia was really important to New Order, New Order played there in 1981 and we played there significantly, the appreciation and the audience numbers have improved every time culminated with that wonderful show we did on The Big Day Out, we’ve always had a fantastic time in Australia and I certainly don’t think this one will be any different because I have got the fans best intentions of making them happy and this one has taken a lot of work, I must say it started with four people in the band and we’d just play the tunes and now to look around and have the responsibility of a fifty piece orchestra playing together it’s like oh my god the responsibility of it is very daunting I must say.

Lastly let’s look ahead to the future, finish this sentence for me, by the end of 2019 Peter Hook wants to…
*laughs* have a rest *laughs*. That would be nice to have a rest but it’s one of those odd things I’m like a kid with a new toy and having those thirty years off eventually made me all the more pressured if you like to make sure I enjoy this tour as much as I can and to sit here as I am doing now planning to celebrate forty years on Ian Curtis’s life I’m not gonna get that rest but I am very satisfied with what I’m doing I must admit.