NICKELBACK return to Australia for three shows only 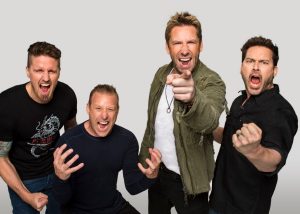 Multi-platinum, chart-topping rock band, NICKELBACK, has announced their massive Feed The Machine Tour will land in Australia this summer, bringing their biggest production yet for three shows only.

Touring in support of their ARIA #3 album, Feed The Machine (out now through BMG), these will be Nickelback’s first Australian shows since May 2015. The multi-platinum-selling powerhouse will hit the Brisbane Entertainment Centre on February 13, Sydney’s Qudos Bank Arena on February 15 and Melbourne’s Rod Laver Arena on February 16 – with very special guests Bad Wolves.

Nickelback return to Australia with their  biggest and loudest production yet, a high octane show of tracks from the band’s enduring nine-album body of work such as all-time classics, ‘How You Remind Me’, ‘Far Away’, ‘Burn it To the Ground’, ‘Gotta Be Somebody’ and more recent hits from their current album, Feed The Machine, such as ‘Song On Fire’ and ‘Must be Nice’.

The international recording superstars have amassed 50-million-plus units sold worldwide, more than 23 chart-topping singles and an online audience exceeding 21 million, with a staggering 1.5 billion YouTube views and 1.4 billion Spotify streams. All the Right Reasons, which sold in excess of 10 million in the US alone, has been recently awarded the RIAA Diamond sales certification, putting them on an elite shortlist of artists to ever accomplish this.

My Live Nation members can also be among the first to secure tickets during the pre-sale commencing at 10am Wednesday, October 10.

Bad Wolves, comprised of five LA music veterans, rose to worldwide acclaim this year with their cover of The Cranberries’ intergenerational hit, ‘Zombie’, hitting #1 on iTunes Overall (USA, Canada, Australia), #1 on iTunes Rock globally, #1 on iTunes Metal globally, as well as taking the gong for the #1 rock song of 2018 on iTunes. The official music video  has accumulated more than 180 million views on Facebook and YouTube combined since its release, in addition to cracking in excess of 55 million Spotify streams. The track has been certified platinum in the US and Canada, as well as gold in Australia and Sweden. In May, Bad Wolves released their debut album, Disobey, which debuted at #9 on the ARIA Charts. In June 2019, Bad Wolves donated $250,000 to Dolores O’ Riordan’s children. The band will also be playing their latest single, “Hear Me Now” featuring DIAMANTE, which has been storming the U.S. rock charts, currently at the #5 position.

About Nickelback
Since forming in Alberta, Canada in 1995, globally celebrated, multi-platinum rock band Nickelback have cemented themselves as one of the most commercially viable and important acts of the past two decades.

Nickelback’s success includes worldwide sales of more than 50 million units, solidifying their status as the “eleventh best-selling music act” and second best-selling foreign act in the U.S. of the 21st century. Their inescapable and irresistible smash ‘How You Remind Me’ was named Billboard’s ‘Top Rock Song of the Decade’ and was No. 4 on the Top 10 songs of the 2000’s list.

Nickelback’s album All The Right Reasons has been Diamond Certified (10 million copies sold) by the RIAA putting them on an elite shortlist of artists to ever accomplish this. Amongst all these accolades, they’ve also been named Billboard’s “Top Rock Group of the Decade.” Along the way, they have received a staggering nine Grammy Award nominations, three American Music Awards, a World Music Award, a People’s Choice Award, twelve JUNO Awards, seven MuchMusic Video Awards, and have been inducted into Canada’s Walk of Fame (2007).

In Australia, Nickelback has accumulated 16-times Platinum album sales including four-times Platinum, ARIA #2 All The Right Reasons, three-times Platinum Dark Horse, ARIA #3 No Fixed Address and Here and Now which debuted at #1. Feed The Machine, released in June 2017, hit #3 on the ARIA Album Chart.

The band has scored five ARIA Top 10 hits with: three-times Platinum ‘How You Remind Me’, ‘Someday’, ‘Photograph’, ‘Far Away’, ‘Figured You Out’.

About Bad Wolves
The Bad Wolves story is one of quiet resilience. The band is composed of drummer John Boecklin (ex-Devildriver), vocalist Tommy Vext (Divine Heresy, Snot) as well as guitarists Doc Coyle (ex-God Forbid), Chris Cain (Bury Your Dead) and bassist Kyle Konkiel (ex-In This Moment) in its ranks. The group – whose members are both seasoned veterans and talented players who have logged critically acclaimed stints in some of rock and metal’s most celebrated acts – emerges as a testament to their collective talent and rapidly expanding fanbase.

In May, the band released their debut album, Disobey which debuted at #9 on the ARIA Chart.  From driving anthems like “No Masters” to the syncopated Faith No More-worthy rocker “Better The Devil,” the crushing power of “Learn To Live,” and the soaring ballad “Hear Me Now,” Disobey is an album that showcases elements of rock, metal, hip-hop and progressive rock into a instantly infectious amalgam of music that’s as infectious as it is groundbreaking. The album also features their acclaimed Gold-certified cover of The

Cranberries’ ‘Zombie’. The version has resonated with audiences around the globe and embarked on a meteoric rise on global charts, garnering over 180 million video views worldwide since its release and obtaining platinum status in the US and Canada, as well as gold certification in Australia and Sweden. Following the untimely death of Dolores O’Riordan, the band made a promise to donate all of their proceeds from the song to her children.