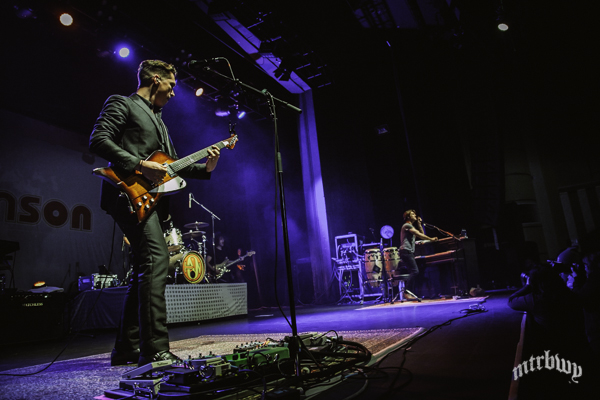 Twenty five years as a band is no mean feat, I mean I guess when you’re brothers you’re stuck with each other but in terms of making music Hanson continue to do it, and while here on this twenty fifth anniversary of their existence as a band and twenty years since the release of their debut album this ridiculously packed sold out Enmore Theatre is ready to hear the songs they’ve essentially grown up with over the last twenty years and I have to say that I’m one of them and ready for some pop rock goodness!

Oh hello Jason Singh! You’ve gotta love a bit of Taxiride and here he is opening the night for us with ‘Everywhere You Go’ and tonight as a trio and more of an acoustic vibe he hits us straight up with one we all know and even gets the crowd joining in on the chorus which is a great way to start the set, leading straight into solo single ‘Hold On Forever’ which is a really great song in fact and one that the crowd latched on to, but following that up with ‘Get Set’ which they all know and the song suits this set up and it’s always good to be reminded of a perfectly crafted tune. Back to his solo album ‘Humannequin’ with ‘I Can Dream’ and it’s keyboard ridden goodness followed by a brand new ballad written for these shows called ‘Strangers’ which was damn good and I look forward to hearing that recorded after I grab one form the merch booth after the set. Then in the what I like to call the ‘Whoa! I never expected that’ files right now he’s covering ‘What’s Up?’ by 4 Non Blondes and well played Mr Singh as you have the crowd loving it right now. Closing his set with ‘Creeping Up Slowly’ which was a gimme he finishes the set strong and I have to say I wish it was longer but it’s also made me want to go home right now and bust out the old Taxiride albums, man they are good songs. Go Bombers!

Hanson walk onto the stage and start things off with ‘Already Home’ and that amazing musicality of the band instantly kicks into gear and you just know that this sold out crowd is gonna go nuts tonight and without even stopping to take a breath the band take it into ‘Waiting For This’ as we shout it out and you can tell they love that one, I particular I liked Isaac’s guitar solo but I can’t help but smile as the crowd goes nuts when ‘Where’s The Love’ starts and as I stand at the back taking it in, actually more like for my own safety I watch the crowd and just everyone around me dancing, singing, smiling and loving every second of this excellent pop rocker.

‘Look At You’ is a soul filled rocker and again the seamless transition into the next track ‘Tragic Symphony’ shows me just how good these guys are at their craft. It’s actually a pleasure to watch as they haven’t missed a beat, a note or well actually anything as they just did it again with ‘Thinking ‘Bout Somethin’ and if any first time Hanson concert goes still had any preconceived notions about the ‘MMMbop’ band then they’d be shut up by now as all it takes is a few songs to show people what they can do and do well. Isaac addresses the crowd but I couldn’t hear a word he was saying over the screams so I’m just going to assume it was to tell is how much San Dimas high school football rules. ‘Been There Before’ might just be one of my favourites of the band and it’s always a treat to hear live, but I say that and then Taylor hits the opening notes of ‘This Time Around’ on the piano as phones get raised and the hands that aren’t holding phones up clap along. As the band trade vocals they lap it up, but in terms of a big ballad this one powers up, hold the phone we just had a dueling guitar solo! Badass. Things just got a little ‘Weird’ in here, see what I did there?! We’ve just gone from power ballad to simply ballad with this one moving straight into ‘Go’ which has always been a standout for me in their catalogue, just one of those songs with a kick ass vibe to it and with Zac on vocals and Taylor and Isaac hitting it with underlying vocals it’s so well arranged.

Oh good, I’m now somehow deafer, Zac just came off the drums and to the front which causes screams as Taylor talks about the first time they came to Australia twenty years ago and they throw in an acoustic rendition of ‘Madeleine’ where they again trade vocals. Hold on, what’s going on here, Zac just took keys and Taylor jumped behind the drums to play ‘Juliet’ as Zac takes lead vocals and hype man duties getting the crowd waving in unison. Taylor tells us “It’s not about the battles it’s about winning the war” which is a great way to look at things as that takes them into ‘Strong Enough To Break’ which is as good as it should be as a big acoustic driven hook laden, catchy little ditty. The ‘Underneath’ album is definitely my favourite from the band so it’s always good to hear songs from it, but as good as that one was ‘Penny & Me’ steps it up one. This was the lead single from the aforementioned album and still stands out to me as when the band came back, so this one seems to be a favourite for many here.

Isaac takes lead again on ‘Watch Over Me’ and harmonies run wild! This song should be a hit, damn this one is just so good. Time now for an acoustic interlude with simply a piano and three vocals giving us ‘With You in Your Dreams’ and some seriously impeccable vocal talent here and that continues with ‘On and On’ as three acoustic guitars come out this time. Ok so it’s time for the new single ‘I Was Born’ which after a long intro kicked off and is already a favourite for the fansons. Plus it has a bitchin’ middle 8 and I love the arrangement of this one so much. If this is a snippet of what’s to come then I find your songs intriguing and would like to subscribe to your newsletter.

‘Minute Without You’ and its catchy chorus gets plenty of love, I tell you what if this one had a key change in it I just may have needed a moment. Thankfully my moment was not required, but a big rock and roll ending that blended into ‘Get the Girl Back’ worked and this groover sees Taylor on lead tambourine. ‘And I Waited’ is a great addition to the set and a more mature song I’ve always felt as it gets away from the pop rock style but still maintains that Hanson feel. Then we get a little ‘Crazy Beautiful’ with some excellent speed clapping, followed by ‘Hey’ sticking back with the ‘Underneath’ album.

OK, so it’s time for the song, the one that 90% of the world think is the only song this band have and base their opinion of the band on by it. Yeah it’s ‘MMMbop’ and if you want to continue to do that then so be it but hearing a version twenty years since its release is pretty rad, the band have matured with the song and every single person here loved it, I mean how can you not? It’s catchy! Then from everyone’s favourite to my favourite ‘If Only’ which is pop rock at its best and if more bands wrote songs like this today the world would be a better place, the energy the band still have this far into the set is amazing, plus some excellent jumping while playing the harmonica gets Taylor a gold star. Time to get ‘Fired Up’ which sounds like an early 80’s rocker and I have no issue with that at all then straight into ‘In The City’ and again another groove type rocker, just full of soul. I dig this!! The band leaves the stage as the screaming and stomping begin.

The screaming continues, actually gets louder as they come back and kick everyone’s ass with their vocal talent with an acapella version of ‘Rockin’ Robin’ before Isaac McFly hits the riff for ‘Johnny B Goode’ and they belt out a little Chuck Berry. Back to the Hanson catalogue and ‘Lost Without Each Other’ is just so damn happy and brings a 2hr 15 minute, thirty song set to a close and with a well-deserved bow and that’s the end.

So the last two times I saw Hanson when they toured here they were great but I just feel they’ve gotten better, maybe like a fine wine (that they’re now able to drink) these brothers go from strength to strength as they mature and continue to make and play music. They may be celebrating twenty five years as a band and twenty years since their debut album but here’s to another twenty five more of this pop rock goodness. Sure I’ll be over sixty in that time but hey, good music lasts forever and I’ll still be listening if they keep making it, I might just have to turn it up a little louder by then…

Set List:
Already Home
Waiting For This
Where’s The Love
Look At You
Tragic Symphony
Thinking Bout Somethin’
Been There Before
This Time Around
Weird
Go
Madeline
Juliet
Strong Enough To Break
Penny & Me
Watch Over Me
With You in Your Dreams
On and On
I Was Born
Minute Without You
Get The Girl Back
And I Waited
Crazy Beautiful
Hey
MMMBop
If Only
Fired Up
In The City
Rockin’ Robin
Johnny B Goode
Lost Without Each Other