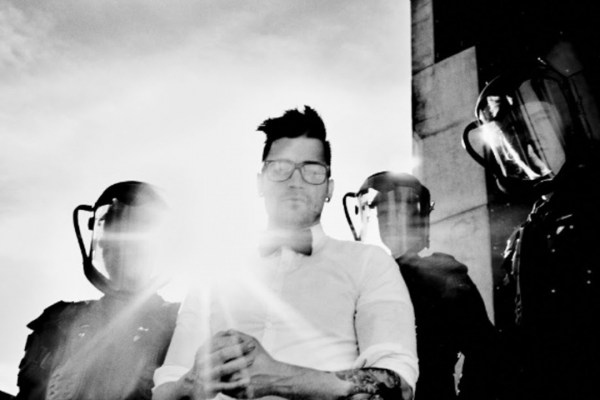 “Then you have other people who expect you to go somewhere and go somewhere new but only in the way they expect you to do it, so it’s a catch 22 there’s no way to please everybody so I just threw all that away and did what I wanted to do.”

From release: STARSET’s story is unique. The band’s founder Bates, is not only a talented songwriter and musician, he’s an equally impressive scientist. A PhD candidate in electrical engineering from Ohio University, he has done research for the U.S. Air Force and taught at the International Space University in France. He‘s as dedicated to promoting science and technology to a wider audience as he is to the development and success of the band. The band also recently announced a deal with Marvel Comics to release a full-length graphic novel later in 2017 that will promote their music and story.

While reluctantly in Guitar Centre in Ohio, front man Dustin Bates gave us a call to talk about the band, their new album ‘Vessels’, 360 degree videos, Marvel comics and just why they’re one the Best Things You’ve Never Heard…

For starters, I’ll be putting you guys up in my ‘Best Thing You’ve Never Heard’ section and you guys are billed as the biggest band you might not have heard about which works perfectly. So for those that haven’t yet heard about you how would you best describe Starset musically and what you’re about?
I guess sonically we call it cinematic rock, so it sounds like the soundtrack to a sci-fi blockbuster if a rock band did it.

I’m always intrigued when an album is given a name that isn’t a song on the album; this album is of course called ‘Vessels’. How did this come about and what does it represent to these songs and this album?
Well there’s numerous ways to look at it, one of the ways is practically every definition of Vessels pertains to an aspect of our various narratives, we actually have four narratives that the record is sort of a soundtrack to and the various definitions of Vessels would be a ship, a container and actually on the inside of our record itself is a description of each of those definitions and how they pertain to the narrative and I guess you’d have to get the record to see more.

Being your second album did you feel any pressure going in to make it?
There was some pressure at first then I just said screw it, because essentially you have implied pressure from fans who want a recreation of ‘Transmissions’ which was the first record, and you have label pressure who expect almost what the clichéd second record is, and some platitude ideas and cliché ideas that we can hopefully get a quick buck from.  Then you have other people who expect you to go somewhere and go somewhere new but only in the way they expect you to do it, so it’s a catch 22 there’s no way to please everybody so I just threw all that away and did what I wanted to do.

In the two and a half years since your debut release what helped to inspire what has become Vessels?
Yeah, numerous things, one was the narratives that I was writing towards, and by the way these stories tell and are building off the tenants of the Starset society which will be publicising shortly and looks at technology and how it will affect the future, and we’re focusing on automation, brain, body and space and the narratives are based on that and that songs are sort of soundtracks to those narratives. So that was one of the things it was built off of. The other thing is that I had sonic goals, on the last record it was an electronic component but maybe it was a little I guess lo-fi and dystopian and I guess if you had to pick a band it was maybe Nine Inch Nails-esque at times and this time I wanted to take EDM both the heavy elements and also the clean elements of stuff like chillstep type of trance music and incorporate that sonically into the record at a highly integrated level, even at a base level in terms of the structure of the songs. I also wanted to take the guitar, where last time a little hard rock this time wanted to make it more progressive at times and borrow from genres and various other things. Like my engineering degree helps the way I approach a record.

You worked with Rob Graves again as the producer, what does he bring to the band to have you wanting to work with him again?
He’s a wizard, we have these sonic goals and sometimes like I said it’s a multiple paragraph of what I’m going for and sometimes as I send examples from other musical pieces, sometimes I record something on piano and guitar and then try to explain how it sounds, sometimes I make noises with my mouth and he has to take all of these things and sort f help me fully realise them and he’s brilliant at it.

I always like to pick out one song that stands out for me and ask about that, and this time it’s ‘Starlight’, is there a story behind this gem?
I mean outside of the general narrative of the entire record, if you look at the record as a whole the last record was more of I guess the centre of it in concept was about overcoming, this record is more about a journey and ‘Starlight’ is definitely a micro chasm of that, and there are numerous metaphors or thoughts I wanted to paint I guess, and the song can be relatable to anybody maybe almost in terms of a love story but hopefully it can be taken in a much larger context as well, it can be taken in a literal context of somebody going on a space journey, it can be about death almost, it can be about letting someone you love go for the rest of infinity. I hope people can take from these songs whatever they see.

Let’s talk about the ‘Ricochet’ video, man, amazing, I was following the doctor all around when I was watching it, how hard was it putting together that 360 video?
Very last minute, we knew we wanted to do some 360 stuff and we always like to incorporate new technology, that’s one of the dichotomies of this band is that us in the Starset society we’re warning of the pitfalls of technology but we also embrace technology and the positives of it, so we’re always trying to get the newest things and it’s hard to do stuff that hasn’t been done a lot and because we all decide to do it last minute. So I was filming that with my friend Denver on New Year’s Eve *laughs* and it was kind of crazy and it turned out pretty awesome.

Of course I have to ask, is there a chance we might see you in Australia anytime soon?
I would honestly love to, I’ve been there once before when I was a student at the International Space University in Adelaide, Australia and loved it and I want to come back. I didn’t see enough of it last time I didn’t have enough to travel so I really hope we can make it back.

I wanted to ask about the Marvel comic deal, as a bit of a geek myself, can you tell us what you’ll be doing with those guys?
Startset and The Starset Society have teamed up with Marvel to do at least one full length graphic novel and hopefully more, and we’re not really ready to say what the content in gonna cover but it’s safe to say that it covers some of the narrative of The Starset Society and we hope it’s an ongoing thing.

Also, Starset is a band now huge in the gaming industry, how does it feel when people attach your music to that community?
That has been just an amazing sort of partnership with various great gamers and so many gamers have user our stuff in their own content and its sort of spread like wildfire and we never anticipated it to be like that to that magnitude and it’s really helped our band and created a really cool community and we really appreciate what it’s done for the growth of the band on the internet.

We’ve talked about narratives and the likes but is there a message you want to get across with the music of Starset?
Yeah absolutely, it’s expressly the tenants of the Startset Society we want people to be aware of the changing world that we live in at the hands of technology and Carl Sagan for instance, his last interview with Charlie Rose he basically said his greatest concern was that our society runs on technology and yet so few people understand it including our politicians who almost vilify it to an extent. We need to understand how it drives our world and we’re seeing that misunderstanding being manipulated even politically here, people are losing their jobs because of automation and that’s only going to be more exacerbated as we go into the future, and politicians rather than addressing this can point elsewhere and say ‘these people are taking the jobs’ or ‘ this policy is taking your jobs’ and maybe there’s a small percentage of truth in that but the reality is that robots and automation and technology are reducing the need for manual labour and it’s not going to change any time soon. With a populous that doesn’t understand that it can be manipulative and we can see the rise of demigods and may other things.

Lastly let’s look ahead to the future, finish this sentence for me, by the end of 2017 Starset want to…
Hmm… there’s the impulsive cliché answer, take over the world, but I’m a little more pragmatic, I would say I want to be headlining theatres and hopefully selling them out.