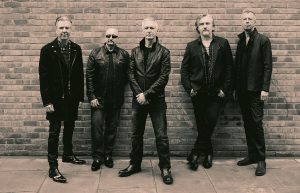 UK rock legends THUNDER are heading to Australia for their first ever tour this March… and it only took 27 years!

Since forming in 1989, the Londoners have established themselves among the UK’s most consistent attractions, notching up some twenty Top Fifty singles in their homeland and cultivating a well-deserved reputation as consummate live performers with the likes of Axl Rose (Guns n Roses), Aerosmith and David Coverdale (Whitesnake) amongst their fans.

With a lineage dating back to the cream of British hard rock – Led Zeppelin, Bad Company, The Who and Deep Purple – and songwriting greats such as the Kinks, The Beatles and The Faces, the band’s sound is a timeless marriage of unforgettable melodies and sheer rock power. With their first two albums ‘Back Street Symphony’ (1990) and ‘Laughing on Judgement Day’ (1992) reaching gold in the UK, Thunder cemented a rock reputation that has lasted decades.

Last year’s ‘Wonder Days‘ album (their first for 6 years) entered the UK national album chart at number 9, and their recent ‘All You Can Eat‘ 2 CD + DVD went straight into the music DVD chart at number 1. With a new album hitting next month, Thunder are proving that not only are they back and relevant, but also more prolific than ever!

Thunder are now more popular than ever before and are heading downunder for four unforgettable nights rocking across Australia.

TICKETS ON SALE NOW!
For More Information And Tickets Head To:
www.MJRPresents.com