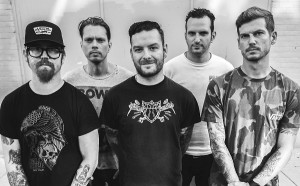 New Jersey-based post-hardcore / emo quintet, Senses Fail, have just announced that they will be returning to Australian shores for a full national tour in March 2016.

The tour will mark the band’s fifteenth year anniversary and their first return down-under since the release of their latest LP  ‘Pull the Thorns from Your Heart’; the sixth full-length from their discography, which was released in June earlier this year.

As well as showcasing their new album, the band also plans to perform material from their back catalogue including cuts from breakthrough debut album ‘Let It Enfold You’ and follow-up sophomore LP ‘Still Searching’; the bands highest charting album to date (US Billboard #15).

Aiming to follow on from the success of their last Australian tour in 2013 playing to capacity crowds,Senses Fail will once again strive to deliver on their energetic and highly-entertaining live performances they have widely become known and loved for.

Joining Senses Fail on the eastern states and Adelaide dates will be much-loved Novacastrian melodic-hardcore band, Trophy Eyes, who have just returned from a stint in the US featuring on Vans Warped Tour.