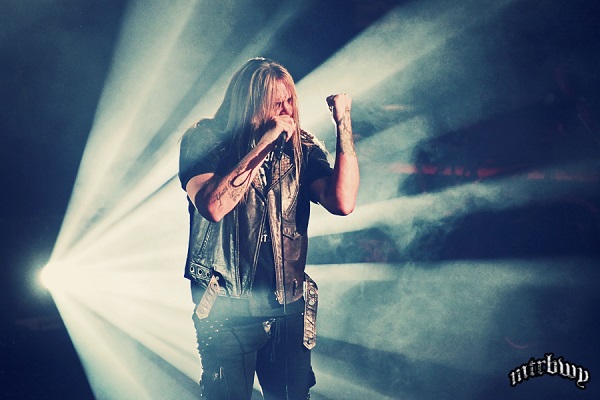 Everything is running a little late tonight, but as I had the chance to wait before doors opened I was able to chat to a number of fans doing the same and it was evident how much people were pumped for the show tonight and just how much there is a love for straight up rock and roll. So all I know if that if this small group was indicative of the remainder of the people coming tonight that we are in for one very excitable crowd…

Doors opened close to 45 minutes late and In Hydes Shadow opened the night to what became a very full Metro early on, a great sign but also I’m stoked for these guys playing right now as their extremely catchy rock tracks bordering on metalcore had people interested. An energetic band, and a singer that likes to get down amongst the crowd make them an easy band to watch and one to watch out for.

A bit of Cinderella playing between sets is always welcomed as the scurry to make up some time is in effect allowing The Art to take the stage and kick off their Aussie rock goodness that we’re all getting to know quite well as the band continue to grab these big supports. ‘Out Of This World’ is a catchy little rocker that goes over well, but as I now need two new ear drums thanks to Jordan’s ridiculously big sounding kick drum, it takes us to another new one with ‘Minutes To Madness’ and what I like tonight and always have about The Art is the use of both Azaria and KJ on vocals as they trade leads yet continue to complement each other vocally. ‘Hold on’ is the stand out of the bands set thus far as it rocks and broods its way along and the band does have their live show down though, case and point with ‘Dead Inside’ man I love that chorus, such a great hook and a song that gets stuck in your head which is a damn good thing. ‘A Figment of Your Imagination’ is up and closes the set to a good reaction from a full Metro.

Sebastian Bach bounds onto the stage to the onslaught intro to ‘Slave To The Grind’ with microphone swinging, head banging and the energy of a twenty year old, Bach is on fire early and this is gonna he fun. You seriously couldn’t have picked a better intro to the night and after some early mixing problems everything sounded perfect. ‘Hell Inside My Head’ from his newest album ‘Give Em Hell’ is next and the band are sounding absolutely on fire and there’s barely a gap between tracks as ‘Temptation’ is up and as Sebastian put it “It’s a beautiful fuckin’ night for rock and roll” and the cheer response signifies that it sure is.

Oh shit wasn’t expecting this one, ‘The Threat’ from Slave To The Grind, killer and you can see the he is having fun as he basks in the praise from the crowd rightfully there as this show is off the hook. ‘Big Guns’ gets a huge cheer and you can see that a number of folks here tonight are here because of that debut Skid Row album so when something gets played off it the crowd responds the way they should. Sweet, staying with the same album ‘Piece of Me’ slays but as the set slows down for the first time and the intro to ’18 and Life’ begins the place truly erupts. I feel like we might get more of the first album that I expected and I’m ok with that. Sebastian is nailing this one right now and his voice is still stellar and he hits those huge notes like it’s nothing.

Dedicating ‘American Metalhead’ to us and tonight aptly renamed ‘Australian Metalhead’ the volume gets turned up to 11 and watching him hit the big notes is something to witness, his style is outstanding. Back to Skid Row with ‘In a Darkened Room’ and as the room fills with lit up phone screens we let there be light in this darkened room at The Metro. Oh man this is like a Skid Row hits night, it’s time for some ‘Monkey Business’ and not only is it as badass as it’s always been, it’s made better with a “1, 2, Rose Tattoo” as the band kicks out ‘We Can’t Be Beaten’ and Bach has made his love of Australian rock well known tonight wearing an AC/DC shirt and even saying if he moved here he’d vote for Angry Anderson for PM. Give that man a visa! They finish off ‘Monkey Business’ to thunderous applause.

After a loved up Bach still somewhat on his honeymoon facilitates a marriage proposal up on stage which was pretty cool, it leads into one of the best damn power ballads of all time in ‘I Remember You’ and guitarist Brent Woods absolutely nailed it, if only there were two of him to really fill out those original guitar parts but man, what he can do with just one is out of this world, God damn that song is amazing in a live setting. As Bach leans back, takes a breath he belts out that huge final note and simply wow, that’s all I can say about that. From the old to the new, we head back to ‘Give Em Hell’ with ‘All My Friends Are Dead’ and man, this band sound so damn heavy on this one, and as much as the new stuff does slip in well with the old it’s interesting watching the reactions of the crowd, although not as big a love as the older material (of course) but it is like Bach can do no wrong.

It’s time for some tattoo pointing as the chant begins for what is always the final song of the night ‘Youth *musical stab* Gone *musical stab* Willllllllllllllld…’ and of course the place goes wild, pun intended…  this song has always been big, was back in 1989 and is even more so now, Sebastian still delivers it with that passion of a twenty one year old and everyone here singing it back is happy, happy that they get to still hear these songs live sung by the voice that sang them.

Band introductions and enough pressure that we are treated to a very impromptu version of AC/DC’s ‘TNT’ that was not only unexpected but magnificent. The song had barely finished and Sebastian leaves the stage for the band to give us a huge rock ending and as the house lights come up there are smiles for days. I fuckin’ love rock and roll and May the Bach be with You!

As Sebastian so eloquently put it during the evening and I quote…  “You can kick the man out of the band but you can’t kick the band out of the man” and that’s so damn right.

Supports: The Art & In Hydes Shadow

Set List:
Slave To The Grind
Hell Inside My Head
Temptation
The Threat
Big Guns
Piece of Me
18 And Life
American Metalhead (Australian Metalhead)
In A Darkened Room
Monkey Business / We Can’t Be Beaten
I Remember You
All My Friends Are Dead
Youth Gone Wild
TNT