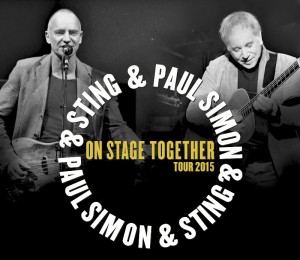 Live Nation Global Touring announced today thatSting & Paul Simon, two of music’s most renowned and enduring artists, will bring their critically-acclaimed On Stage Together tour to Australia and New Zealand in January and February 2015.

The tour kicks off Friday, January 30th at Vector Arena in Auckland and will continue on to select cities and venues including the Brisbane Entertainment Centre, Rod Laver Arena in Melbourne and Qantas Credit Union Arena in Sydney in addition to events in the picturesque outdoor venues of Coopers Brewery in Adelaide, Hope Estate Winery in the Hunter Valley and two A Day On The Green shows at Mt Duneed Estate (formerly The Hill Winery) in Geelong and Sir James Mitchell Park in Perth.

Tickets for all performances go on sale 10am on Monday, July 7th (complete itinerary follows).

As long-time friends, the concept for the “On Stage Together” tour originated at the Robin Hood Foundation benefit in 2013 where they performed together for the first time. Both artists, who are known for exploring world rhythms, have pushed the boundaries of popular music and continue to speak to generations of fans.

As exemplified on their North American tour earlier this year, the concerts in Australia and New Zealand will feature two of music’s most iconic singer/songwriters blending their voices and their bands while performing their best-known songs both together and apart.

In what was one of the most highly-praised North American concert tours of 2014, media and fans alike were unanimous in their reviews.

“One of the most surprising, daring, and rewarding double bills…” – Hollywood Reporter

“…great melding of music by two of the world’s finest songwriters and singers.” – American Songwriter

“We are thrilled to be bringing the tour to Australia and New Zealand,” said Arthur Fogel, President – Global Touring and Chairman – Global Music, Live Nation.  “The run in North America this year was an incredible success on all levels. These two legendary talents delivered an unforgettable night of music.”

Tickets for Paul Simon & Sting: On Stage Together will go on sale to the general public beginning Monday, July 7th at 10am. The artists’ fans will have access to a pre-sale through each artist’s official website starting Tuesday, July 1st at 10am through Thursday, July 3rd at 3pm (all times local).

American Express Card Members will have an opportunity to purchase tickets before the general public from Wednesday, July 2nd at 10am to Friday, July 4th at 5pm. Visit facebook.com/AmericanExpress for complete Card Member information.

My Live Nation members can also be amongst the first to secure tickets during the members’ pre-sale beginning Saturday, July 5th at 10am through Sunday, July 6th at 10am.  For complete details visit: livenation.com.au


TICKETS FOR ALL SHOWS
ON SALE 10AM MONDAY JULY 7

My Live Nation & Ticket Agent pre-sale:
10am Saturday July 5 until 10am Sunday July 6