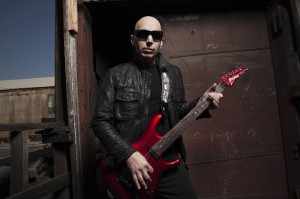 JOE SATRIANI has been an unstoppable force on the music scene for more than 27 years.

Acclaimed around the world as one of the most technically accomplished and respected guitarists in rock music, the Australasian leg of his mammoth world tour brings the guitar professor back for his first headline shows since 2008.

The tour, which is in support of Satriani’s most recent and 14th studio album, Unstoppable Momentum, begins with two shows in New Zealand before travelling across Australia for a five-city tour commencing at The Tivoli, Brisbane, on November 4.

Tickets for all shows go on sale 10am Friday June 27.

My Live Nation members can be amongst the first to secure tickets during the exclusive pre-sale commencing midday Monday June 23. Sign up at www.livenation.com.au

Embarking on his recording career, Satriani’s 1986 full-length debut Not of this Earth was followed in 1987 by his breakthrough album, the seminal Surfing With The Alien. The album was the first instrumental guitar album to break into the US Top 40 and 26 years on, the album still remains the measuring stick by which all instrumental rock guitar records are still considered.

Satriani quickly established his reputation as one of rock’s most talented guitarists and has repeatedly been voted ”best guitarist” in leading guitar magazine readers’ polls. An undisputed master of modern rock guitar he has gone on to sell more than ten million albums worldwide, earn numerous accolades including 14 Grammy nominations, as well as developing his own guitar line with Ibanez.

Satch’s previous visit to Australia was as one-third the guitar-heaven supergroup G3, which he co-founded with Steve Vai, the group touring here in 2012 with fellow (Toto) axeman Steve Lukather.

TICKETS ON SALE 10AM FRIDAY JUNE 27

Check out our new interview with Joe Satriani HERE