Dead In A Second – The Double Treblio 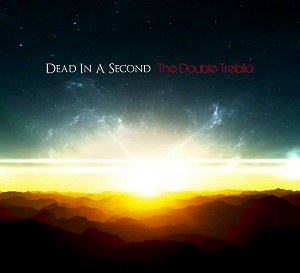 I must start by saying that I always dig it when I’m introduced to a band that has had an originals release before yet I’ve not heard it, although I had been introduced to Dead In A Second via their cover of The Divinyls track ‘Boys In Town’ although renamed ‘Girls In Town’ for DIAS to release. But with no prior originals knowledge this lets me come in with no comparisons to previous work and in this case it’s the new mini album by Dead In A Second titled ‘The Double Treblio’. So let’s check it out.

Opener ‘Chrysalis’ is in my opinion exactly what any release needs to kick off what a band is all about, you get a feel for what you’re in for and my hopes are high as this rocker with its mix of aggressive vocals blended with an almost rap rock feel opens up with a monster chorus that Karnivool would be proud of. If this is the sign of what’s to come then bring it on. As ‘Reputation’ feels like the band take on an Australian version of Papa Roach and I like it, there is just that vibe throughout it as musically it packs a punch and the driving rhythm under the song keeps you hooked.

Moving on to ‘Compute The Line’ with it’s interesting introduction and great opening line of ‘if you don’t know how to fix it then please stop breaking it…” which should be a lesson to us all, but what I love about this song when it takes off is it feels like one of the best songs that The Butterfly Effect never wrote. There’s that groove and perfectly held vocals throughout and soaring in the chorus when dropping back from the heavier darker verses. Without knowing the bands influences I can hear them all over it, and I’d put money on me being right too. ‘Oceans Of Mind’ I know will be intense purely from the opening note and as the music truly kicks in, I find myself in one of my favourite musical places. The ballad. Now over the years my expectation of the musical ballad has become high, very high… So will this one impress? Short answer, yes. It’s only lacking for mine is that extra bit of ‘power’ to smash the chorus out of the park, but the middle eight and guitar solo help to make up for what was ‘lacking’ in my opinion, but lyrically I dig this song the most of all of them so far, turn those guitars up and we have a winner, but as I said, that’s just personal preference.

‘Hello Goodbye (HG2)’ find the guitars missing from the last song as my speakers just thanked me for almost making them explode when this one started. There are a lot of musical elements in this song but the production balance is so well done here to ensure everything is at the right level and not too dominant. I like this track and love the breakdown mid song as it right now starts to build and does! I could happily turn around after this song and repeat it, close to, if not the best on the release.

To end today we have a remix of ‘Streetlight’ and truly I’ve never really been a huge fan of remixes and this one I maybe just don’t get, I suppose not knowing the original either is a hindrance and that’s my own fault, but this didn’t do it for me really, although major credit for throwing it on there to show what you can do, as it was well done but after getting my socks rocked off I would’ve loved to go out with a bang.

Overall, this was a great Mini album and well done to Dead In A Second for showing us what they can do, which plain and simple is rock. Onward and upward I say and welcome to rotation in my collection!
Check out our interview with Triz, HERE

For fans of: Rock/Hop/Rip your face off