“It’s a great way to come down here and get the most people, like the most bang for your buck with people watching because we don’t get here that often but when we do get here and see tonnes of people it’s a really great way to get our band out as much as possible.”

From Bio: Sometimes, a much-loved and highly successful band needs to shake things up a bit to keep things fresh and interesting for their fans and for themselves, all the while retaining the signature sonic hallmarks that have defined their sound. For their upcoming sixth album, Massachusetts metal pioneers Killswitch Engage reunited with original singer Jesse Leach, whose vocals and lyrics on 2002’s landmark Alive or Just Breathing are fan-favorite qualities and part of what helped put the band on the map as one of the most important bands of the ’00s metal revival. Call it coming full circle, returning to their roots or coming home again. Whatever the case and no matter what you choose to label it, Leach’s return to the fold is welcomed and anticipated by all involved, from the band members themselves to the fans.

Teaming up to do some interviews this year for Soundwave with The AU Review, we sat down with Mike, Joel and Justin from Killswitch Engage to get the low down on their time here at Soundwave as well as their forthcoming album ‘Disarm The Descent’ which is released at the end of March.

Welcome back to Australia, here as part of the Soundwave Festival, a festival you’ve played before back in 2008, how have the first couple of shows been?
Joel: Great.
Justin: Awesome.
Mike: Like riding a bike, a really hot bike. *all laugh*

Have you had a chance to check out any bands yet or is there anyone you’re looking forward to seeing on the tour?
Mike: Kyuss Lives, every day… we do a signing and then I have about ten minutes to run to the stage from the signing so I’ll be doing that every day, you’ll see me there.
Joel: I haven’t seen anyone yet.
Justin: I think I’ve missed everybody so far too… the first couple of days have been a little hectic.
Mike: We’re still easing into it.
Joel: I want to watch Red Fang but they’re on at like 11 in the morning, so it’s tough to get there sometimes, especially when we’re doing the morning flights. Definitely want to see Anthrax with Jon playing.
Mike: Absolutely, our buddy Jon from Shadows Fall is playing, he fits right in with that band.

Can you tell us about the experience of playing on a festival of this kind of magnitude over here?
Mike: It’s run really well, so it’s not like you’re pushing and pulling in any sort of direction, it seems pretty easy.
Justin: It’s great, it’s a great way to come down here and get the most people, like the most bang for your buck with people watching because we don’t get here that often but when we do get here and see tonnes of people it’s a really great way to get our band out as much as possible.

You of course though have your new album due out at the end of March, now I’ve heard it and I know what I think, but can each of you give me 5 words that sum it up for you?
Mike: Aggressive, chugga, chugga, chugga, chugga *laughs* sorry, six words blast-beat and blast-beat is one word.
Joel: I was going to say ‘Blast-beat or guitar solo’, *all laugh* it’s one of the two. That pretty much does it. There are a couple of exceptions but not many.
Justin: Sing, yell, solo, blast, that’s it… 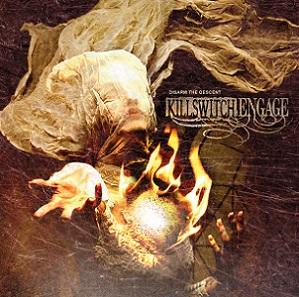 So what’s the meaning behind the title of the album ‘Disarm The Descent’?
Mike: It was something that Jesse and I had been talking about over the phone a bunch of times, just texting back and forth. A lot of times I’ll watch TV and just write down words of phrases that happen to pop up that just stick in my head, disarming or disarm popped up and I had written it down it and it just kept replaying itself over in my head and I wrote it to Jesse and he really liked it.  It sort of has a lot to do with the name Killswitch Engage, when I was in high school, there was this big red button that was on the wall and I was in a shop class where they had printing presses and if anyone stuck their finger in the press you would hit this button that would shut off all the power, essentially a kill switch and you were engaging it. Sort of like shutting everything down and starting over again, ‘Disarm The Descent’ is just kind of just disarming everything and just starting fresh.

It’s been a big break between albums, obviously Howard’s departure threw a spanner in the works there but when that happened was it a case of just keep going with what you had or was it scrap it all and start again?
Joel: We’d given a lot of the same demos to Howard actually, some of the stuff it’s been in the works for a while now, almost a couple of years now at least the songs anyways, and once he left we gave the same ones to Jesse and said ‘what would you do with them?’ plus many more I guess.
Mike: We were overzealous with writing.
Joel: Yeah we wrote too many songs.
Mike: Yeah we just cut it, we had to stop.

With the time in between, were you at any time worried that it may not come, or it was taking too long, were there any issues with the changes that happened?
Joel: We were pretty worried the whole time I think…
Mike: Anxious to do it but worried if people were still going to remember, after two years the whole landscape has changed, just everything appears different now. All new bands at this point, all way younger than us *all laugh* so we’re the old guys all of a sudden…

Has having Jesse back in the band lit a fire under you again?
Joel: I think so, yeah.
Mike: It seems like it, his enthusiasm has infected us as were all these old jaded guys and all of a sudden we’re all jumping around like mad men again and trying to keep up with him *laughs*

So did you specifically set out to do anything differently this time around compared to previous albums?
Justin: I don’t know, did we really? I never feel like we really think alright this time we’re going to this or this time we’re going to do that, it’s just kind of whatever mood we’re in at that particular time and for whatever reason this time probably because we have been off for so long or we haven’t been on the road as much we just all wanted to play fast, we wanted to play aggressively, that’s just kind of the way it happened.

That leads me in to my next question, what about playing wise, any new tricks or techniques you wanted to try out?
Justin: I think a lot of it came from that, there’s a lot of blast beats, there’s a lot of guitar solos which is kind of a new thing, I think just came out of that is we really wanted to play.
Mike: Just really anxious, anxious to get going and do this thing again.

Mike, you’ve once again created the cover art, what was the concept you were going for on this album?
Mike: Well I had three or four different artists that I was working with trying to come up with different ideas, it just so happened that my idea was picked by these guys. I was inspired by a friend’s photo that had the similar look of a veil blowing in the breeze and it made the face look like it was on fire or smoking and I really liked that idea and then just translated it that way. Jesse fell in love with it right away and was all of a sudden ‘This means this, this means this, this means this’ he’s like ‘If I don’t know better I’d think that you’d read my lyrics already’ we all said ‘OK, well I guess that’s the cover.’ *all laugh*

What’s been the biggest evolution of the band you’ve seen personally over the fourteen years together? Besides guitar solos…
*all laugh*
Mike: They would’ve been doing them from the beginning, they always say if the song calls for it, it’s going to get a solo, so it’s more for them, right?
Joel: I guess for the first time they did… *all laugh* I think the two biggest things were, number one, getting Howard initially when Jesse left cause he kind of took things to a level we weren’t at and now Jesse has his chance to come back and do that again and bring us back to life once again. So the singer changes probably.
Mike: Our ‘Behind The Music’ is going to be like five or six hours long, with back surgeries, singer changes, all sorts of member things going on, it’s going to be a long on. *laughs*

Is there something that you haven’t yet done throughout your time with the band that you still want to do or somewhere you want to go?
Mike: I’d love to go to China.
Justin: Yeah, there are a lot of Asian places we haven’t ever been to that we really would like to, some of the big ones for me.

What does the remainder of 2013 have in store for Killswitch Engage?
Justin: Tours!
Mike: This is the beginning of the whole thing, the record comes out in about a month, so we start it with this tour and then we just roll it in to the next and the next…