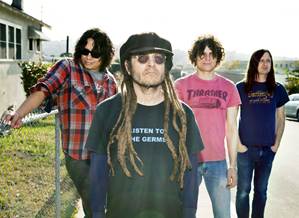 LA punk rock supergroup OFF! have had busy year off the back of their critically acclaimed self-titled debut album. This month will see them bring their explosive old-school rock show to the national Big Day Out, and headlining sideshows in Sydney, Brisbane and Melbourne.

Destroy All Lines and Bombshell Zine are pleased to announce the collection of local acts that will be accompanying OFF! on their upcoming headlining performances.

Toe To Toe and Chinese Burns Unit will join OFF! at The Annandale Hotel in Sydney, Velociraptor and Undead Apes will warm up the Brissy masses and Bloody Hammer and Bat Piss will open at Melbourne’s Corner Hotel.

Following up their successful introductory tour of Australia last summer, Keith Morris (Black Flag, Circle Jerks) and his troupe of punk rock royalty are primed to spit fire, riffs and fury at punters, playing breakneck tunes from their lauded ‘First 4 EP’s’ release and debut self-titled album. Pitchfork Media said it succinctly: “And as long as Keith Morris has occasion to scream, you oughta listen, and listen good.”

Having spent most of 2012 fulfilling a brutal touring schedule with legends like Refused and the Red Hot Chilli Peppers and playing festivals like Coachella, OFF! are in impressive live shape.

Guitarist Dimitri Coats says so appropriately of OFF!; “There’s a lot of soul in this, we’re not fucking around”.

Don’t fuck around, get tickets quick to witness what will be one of the live highlights of 2013.

Check out our interview with Dimitri Coats right here…

Destroy All Lines and Bombshellzine.com present…

OFF! BIG DAY OUT SIDESHOWS

TOURING FOR BIG DAY OUT JANUARY 2013

OFF! – Self-Titled Album available now on 12″ vinyl and CD via UNFD