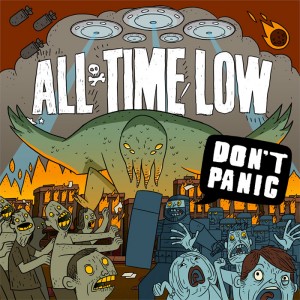 More focussed than past releases, you can attribute this to the band working with one producer, Mike Green, rather than multiple producers as they did on Dirty Work.  Likewise the song writing this time around is almost entirely handled by Alex Gaskarth, save for contributions from Mike Green and Fall Out Boy’s Patrick Stump on Outlines – which I‘ve gotta say really reminds me of that great Aussie pop rock band Taxiride.  Returning to label Hopeless Records is also significant and the experiences around the Dirty Work release have provided lyrical fuel on tracks such as So Long And Thanks For All The Booze “you gotta tear me down to set me free, gimme gimme my revelation, gimme back my scene, you’ve gotta let me be me”.  Well don’t panic fans, because Don’t Panic sees All Time Low well and truly being themselves.

The album comes with a massive guitar crunch which definitely sees All Time Low at their musically heaviest – give So Long Soldier a listen and tell me that ain’t god damn heavy.  Anthems, they deliver them in spades, I mean every single track is an anthem and a memorable one at that, there’s no “every song sounding the same” syndrome on this album.  For those heading along to Soundwave 2013, learn the words to the likes of first single For Baltimore and The Reckless And The Brave both with their tinges of Green Day moments as I’ve, got a feeling these songs will go off like a bottlerocket at Festivals.  Elsewhere, Backseat Serenade has gotta be one of the best pop punk songs released this year…it’s just that damn good and features backing vocals from Hey Monday’s Cassadee Pope.  Somewhere In Neverland isn’t far behind, which pretty much sounds like Hanson on steroids with its massive pop hooks, I love Hanson, so this is a good thing – just in case you were wondering?  All Time Low are certainly known for their song titles and the song title awards on this album go to If These Sheets Were States and The Irony Of Choking On A Lifesaver, the latter an ode to the “snakes hidden in my daffodils when I’m picking flowers…”.  Haters, I think that means YOU!

Of course every album release is a band’s greatest release ever and in our All Time Low interview which you can read by clicking right here….Rian Dawson will tell you exactly that about Don’t Panic.  But you know what, I’ll happily testify in a court of law that Don’t Panic is indeed the greatest album that All Time Low have ever made.  Really, is there anything more left that I need to say?

Check out our interview with Rian Dawson….

For fans of: Pop punk at it’s crunchiest and hookiest!