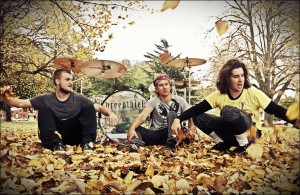 In support of releasing their new single, ‘Mr Number 1’ , hard-hi t t ing Br isbane rockers Greenthief will be bringing their unique blend of psychedelic audio mayhem to all corners of the country with their first national headline tour. The track is the first taste of their debut album to be released in 2013, which sees Greenthief back in the studio with aria winning producer Steve James (Sex Pistols, The Jam) Previous EP ‘Retribution’ was received graciously across the country last year, earning the band a finalist spot in the Queensland Music Awards and an inclusion in Rage’s Top 50 video clips of the year. Youth radio broadcasters triple j showed strong support for standout tracks ‘Vultures’ and ‘Salad Days’ before showcasing Greenthief as a featured artist on Unearthed.

So far 2012 has been a massive year for the band, with them recently completing a 23-date national tour in support of Australian rock legends ‘The Butterfly Effect’ playing to sold out venues across the country (April/May/June). With a swag of definitive tour and release plans lined-up for the remainder of the year, now is the time to become acquainted with one of Australia’s most engaging alt-rock bands. ‘Mr Number 1’ will be released 10th August.

“‘Retribution’ has the power to make lesser bands just give up for good, believe it.” – Uber Rock (United Kingdom)