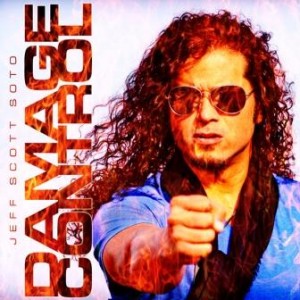 In 25 words or less: “Damage Control really is a must purchase for any Jeff Scott Soto fan and anyone who appreciates high quality melodic rock.”

For someone who has long been hailed as one of the premiere vocalists in the melodic rock sphere for nearly 30 years, it surprised me somewhat to be reminded that Damage Control is only Jeff Scott Soto’s fifth solo album.  With a career spanning beginnings as the vocalist for Swedish guitarist Yngwie Malmsteen, through to the mighty Talisman, contributing vocals to soundtrack of the Rock Star movie, the killer Soul SirkUS, fronting Journey for a period of time and most recently W.E.T and Trans-Siberian Orchestra, whilst solo numbers are relatively few, Jeff has certainly been incredibly active, both in a touring and recording capacity, with over 60 albums that feature his vocals.

After his previous solo album Beautiful Mess offered a musical departure into a more contemporary soul and funk based direction which generally speaking wasn’t exactly met that positively by Jeff’s hardcore and long standing fans, Damage Control sees Jeff delivering an album that is bound to appeal to those that can only fathom hearing Jeff’s vocals all over melodic rock styled songs, and nothing else.  I can’t help but wonder if Damage Control as an album title is in fact a cheeky reference to the reaction to the last album?  Regardless, this is an album that should instantly appeal to those who have previously dug Jeff’s performances on his solo releases such as Prism and Lost In Translation, the crunchier Soul SirkUS or the monstrous melodic rock/AOR of W.E.T.

Contributing to the recording of the album is a cast of many, with the likes of special guests such as Dave Meniketti (Y&T), Jamie Borger (Talisman/Treat), Casey Grillo (Kamelot) and Joel Hoekstra (Night Ranger).  The title track and AfterWorld deliver some pretty heavy riffing and there’s lot’s of guitars throughout the whole album for that matter, where the likes of first single Look Inside Your Heart, Die A Little and How To Love Again are brilliant melodic rockers.  Personally, I’ve always loved Jeff’s voice across a ballad and BonaFide is a real album highlight and doesn’t disappoint.

It simply is a strong album from start to finish and a highly enjoyable listen at that.  Damage Control really is a must purchase for any Jeff Scott Soto fan and anyone who appreciates high quality melodic rock.

Track listing:
Give A Little More
Damage Control
Look Inside Your Heart
Die A Little
If I Never Let Her Go
Tears That I Cry
BonaFide
Krazy World
How To Love Again
AfterWorld
NeverEnding War