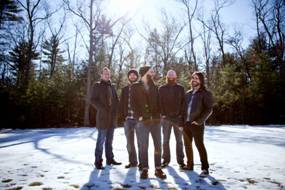 Killswitch Engage are pleased to announce that they have filled the singer vacancy in the band and they have done so with a familiar face: original vocalist Jesse Leach.

Leach sang on the band’s first self-titled album, which came out in 2000, and on their landmark 2002 Roadrunner debut Alive or Just Breathing. Leach left the band in 2002, but his work on Alive or Just Breathing has always been revered by diehard, longtime KsE fans. Things have come full circle a decade later, and Leach and the band couldn’t be more pleased about this reunion.

The band revealed that Leach auditioned for the job he once held and pretty much blew everyone away and then some. The band stated, “After much deliberation and careful consideration, we are pleased to announce that Jesse Leach has rejoined Killswitch Engage. Our job was to find the best person to fill Howard’s shoes: a decision based on talent and not familiarity.”

The band also is psyched to share the news with fans, saying, “This change is very exciting. We know you’re going to love it. This is truly a new era in KsE history and it is ready to shred your face off. So, please help us in welcoming Jesse back into the KsE family; he is a rare and great talent, a fact that older KsE fans have known for years. Here is to a killer new record and a bright future. The five of us cannot wait to write this record and play shows together and bring that feeling to our fans. It’s been far too long.”

The “new” guy himself also commented on his return to the band after a decade-long absence, saying,

“It is a great honor to rejoin my brothers after all of these years. After some discussion and much reflection, it was obvious to me this was the path I was meant to take. We got together and jammed on the ‘Howard-era songs,’ as well as some Alive or Just Breathing-era songs and we all felt the synergy.”

He continued, “I look forward to writing the new record, since the demos sound absolutely amazing, as well as breathing new life and getting comfortable with the soulful songs Howard has written. It is a new chapter of my life filled with new and exciting challenges. I will give all that I can to honor the position I have been given and take nothing for granted. I will sing every note with all of my soul. I am very blessed and very thankful to be back in the KSE family! All things happen in their due time and now is the time for this reunion and new direction.”