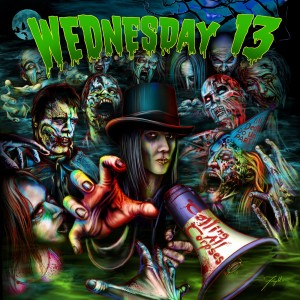 In 25 words or less:  Catchy as hell shout out choruses and tongue in cheek lyrics, horror inspired song titles against a backdrop of infectious hard rock riffs are the order of the day throughout the albums 11 songs…

Wednesday 13 must surely be one of the most prolific music artists on the planet, having released an album (eg. Wednesday 13, Murderdolls, Gunfire76, Bourbon Crow) nearly every single year since the year 2000.  Having only just released a new Murderdolls album last year with his sidekick Joey Jordison from Slipknot, Wednesday 13 now returns in 2011 with the slashing Calling All Corpses, his first solo album since 2008’s Skeletons.  With Skeletons, the Murderdolls release and the Gunfire76 project giving Wednesday 13 the opportunity to purge a bunch of personal problems and whining and bitching as he puts it, Calling All Corpses returns to the “leave your brain at the door” mentality reminiscent on the likes of Fangbang and his first band Frankenstein Drag Queens.

Catchy as hell shout out choruses and tongue in cheek lyrics, horror inspired song titles against a backdrop of infectious hard rock riffs are the order of the day throughout the albums 11 songs.  That’s nothing new as far as Wednesday 13 is concerned, but as with every release Wednesday 13 is involved nothing is ever exactly the same.  Musically, this album takes upon a more hard rock inspired flavour with a healthy dose of punk, think the likes of Alice Cooper, Twisted Sister, early Motley Crue…you get my drift.  Musically, it’s certainly far less menacing than Wednesday 13’s other material, but rest assured, he obviously still swallows a healthy diet of razorblades to keep those trademark vocals in check!

Whilst the likes of I Wanna Be Cremated, Ghoul Of My Dreams and One Knife Stand deliver what you would expect in a lyrical sense, there are a few little twists and turns through the album.  London After Midnight is not about the horror movie as many would expect, instead a track that is an ode to life on the road. We All Die, is a track penned in response to the traumatic experience of being in Japan during the earthquake earlier this year.  Bad At Being Human is a dedication to The Cramps lead singer Lux Interior who recently passed away, and album closer and first single Something Wicked This Way Comes is an autobiographical track…”Alice Cooper and GI Joe taught me everything I know…”

With Wednesday 13 headed to Australia for Soundwave 2012, we will soon get the opportunity to hear where tracks such as Candle For The Devil and the title track will truly shine…in the live arena.  In the meantime, these instantly memorable songs will be well and truly embedded in that brain of yours come February…assuming of course you didn’t literally heed Wednesday 13’s earlier advice and leave it at the door!

Check it out if you like:  Shock rock, Motley Crue, Alice Cooper, Twisted Sister and Wednesday 13