Hardcore Superstar – The Party Ain’t Over Til We Say So…. 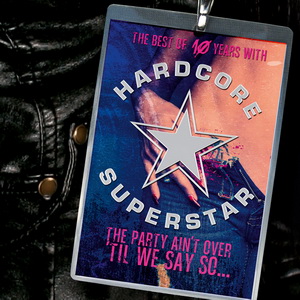 Having existed for well over a decade now, when it comes to the Swedish “sleaze” scene, few bands are bigger than Gothenburg natives, Hardcore Superstar, who have blazed the trail since the year 2000 for the cavalcade of bands that have since followed.  With the prospect of a new studio album not likely to be released until April 2013, Hardcore Superstar have just released a “compilation” album featuring 20 songs over the course of their history.  The Party Ain’t Over Till We Say So… includes one brand new track written and recorded specifically for this release, the insanely catchy We Don’t Need A Cure. listen to this song once and it will be stuck in your head, trust me! La, la, la, la, la, la, la, la, la, la….

With the track listing being selected as a combined effort between band and record label, there aren’t any major surprises when it comes to the 20 songs chosen for the album.  It’s great to see all albums adequately represented, which for me is a key thing for the newer generation of fans to appreciate the musical journey the band has taken since they first begun well over a decade ago. Recognising the very, very first release for the band in 1997 titled It’s Only Rock N Roll, essentially it was the year 2000 release Bad Sneakers & A Pina Colada which brought the band to worldwide prominence with the single Someone Special, in a time when bands such as Creed ruled the airwaves.  Whilst there is an element of the 80’s trashy hard rock sound in their earlier material, back in 2000 the band equally drew upon British punk influences and even a tinge of Oasis styled Britpop. The two albums that followed saw Hardcore Superstar push further into this direction and tracks such as Still I’m Glad and Honey Tongue from fourth album No Regrets well and truly illustrate this for those newer fans who may find this hard to believe!

However, it took a much needed 6 months break from each other during 2004/2005 after burnout from years of relentless touring, to be the bands defining moment.  The moral of the story…the band hit back in the best way possible in November 2005 with the release of their self titled or “Black” album with instantly classic songs such as We Don’t Celebrate Sundays. Wildboys, My Good Reputation and Standing On The Verge that set about truly defining the bands sound.  “Street metal” as the band affectionately refer to it as, a blending of thrash metal and sleaze rock.  Dreamin’ In A Casket followed and the galloping riffs on the title track were as far removed from the No Regrets album as you could get.  However, after the recording of the album, original guitarist Thomas Silver departed the band to be replaced by Crazy Lixx guitarist, Vic Zino.

Beg For It followed and continued in much the same vein, with tracks such as Into Debauchery and Beg For It.  With their 2010 release Split Your Lip, vocalist Jocke Berg, bass player Martin Sandvik, drummer Magnus “Adde” Andreasson and Vic Zino have arguably released the bands finest moment.  Focussing on delivering a truly live sound, the band shed the produced sounds on Beg For It and just as did the “black” album, Split Your Lip delivered some defining Hardcore Superstar songs such as Last Call For Alcohol, Guestlist and Moonshine, but whilst at the same time showing another musical side to the band with the acoustic based tracks Here Comes That Sick Bitch and Run To Your Mama.

If you are new to Hardcore Superstar in the last year or two, then “The Party Ain’t Over Till You Say So….” Is a great way to give yourself a crash course in the history of one of the most essential and successful hard rock bands Sweden has ever produced.

Check out our interview with Hardcore Superstar right here….

Check it out if you like: Hard rock, Hardcore Superstar and Swedish sleaze rock