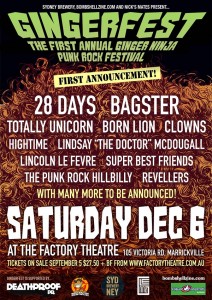 Some of the most exciting punk and rock bands from across the nation have joined forces to form the stellar line-up for the inaugural ‘GINGERFEST’ fundraising event, to be held at Sydney’s Factory Theatre on Saturday December 6.

Gingerfest is an exceptional and highly anticipated all day event to raise money for Vision Australia in memory of Canberra man Nicholas Sofer-Schreiber, who was tragically murdered in late 2013. Known widely and affectionately as ‘The Ginger Ninja’, Nicholas was a long-time and much loved stalwart of the Canberra punk rock community.  Event co-curator and close friend of Nicholas, Luke Griffis explains the concept: “The Ginger Ninja was more than just a friend to us, he was family, he was the heart and soul of our little music community. His legacy will live on. The best way we thought to remember would be just this, an annual punk rock festival. Celebrating his life with the thing he loved the most; music”

The quality of the Gingerfest line-up is a stunning testament to the powerful impact ‘The Ginger Ninja’ made on the Australian punk rock community. An inspired and positive way to honour his memory, and help some needy folks in the process. Get on board with one of the most positive events on 2014’s music calendar.