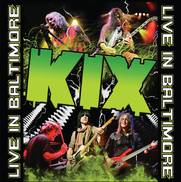 When it comes to releases on Italian label Frontiers Records, nothing really surprises anymore.  So when I heard the winds blowing news of a live KIX CDC/DVD to be released in 2012 and a brand new studio release in 2013, despite the fact that the band haven’t had any recorded output since essentially 1995, I didn’t even batter an eyelid.  […]

END_OF_DOCUMENT_TOKEN_TO_BE_REPLACED

August 7, 2012 by MTRBWY in Music News Comments are Disabled

KIX was founded in 1978 in Hagerstown, Maryland. They were considered one of Maryland’s top cover bands prior to their signing with Atlantic Records in 1981, when they debuted with their self-titled album “KIX”. With this album, the tongue-in-cheek rock & roll style of KIX was established. Their 1983 follow-up, “Cool Kids” showcased a slightly more commercial side of the […]