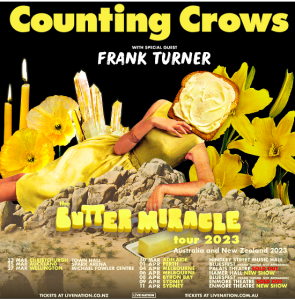 Turner released his ninth studio album FTHC early last year, a record of reckonings, realisations and redemption which debuted at No.1 on the UK Albums chart. Returning to his punk rock roots, the album is harder than previous solo material, exhibiting genuine honesty as he opens up about identity, aging, addiction, anxiety, loss and love.

“I’m fully aware that I’m not the most experimental musician in the world, but I made an electro pop record and then I made a history folk album, both of those were pushing at the boundaries of what I do,” explains Turner of his last releases. “But the music I’ve made has always been punk adjacent or punk with an adjective; whether it was it was post hardcore, folk punk or indie punk. I just mostly still listen to punk rock records, so I wanted to make one – a noisy and, in places, angry record, which is much more sonically aggressive than anything I’ve done in my solo career.”

Recorded in-between lockdowns via FaceTime with Turner and his band The Sleeping Souls in Oxford and producer Rich Costey in Vermont, they made the entire record remotely, with drums from Nine Inch Nails’ Ilan Rubin, as well as guest appearances from Jason Isbell, Biffy Clyro’s Simon Neil, Muse’s Dom Howard and Death Cab for Cutie’s Jason McGerr, all of whom sent their respective parts from various corners of the globe.

The Butter Miracle Tour will take in Adelaide at Hindley Street Music Hall on March 30 followed by Palais Theatre Melbourne on April 4, Hamer Hall Melbourne on April 6, and Enmore Theatre Sydney on April 9 and 11. For complete VIP, tour and ticket information, visit: livenation.com.au.

Counting Crows have enchanted listeners worldwide for more than two decades with their intensely soulful and intricate take on timeless rock & roll. Exploding onto the music scene in 1993 with their multi-platinum breakout album, August and Everything After, featuring Mr. Jones, a song that made a huge impression on Australian audiences, the band has gone on to release seven studio albums, selling more than 20 million records worldwide, and is revered as one of the world’s most pre-eminent live touring rock bands. In 2004, Counting Crows recorded the chart-topping Accidently in Love for the animated motion picture Shrek 2. The instant success of the track earned them an Academy Award nomination for Best Original Song at the 2005 Academy Awards, a Golden Globe nomination for Best Original Song, and a GRAMMY Award nomination for Best Song Written for a Motion Picture, Television or Other Visual Media.

Over the last 30 years, the masterful songwriting from frontman Adam Duritz put the band at No.8 on Billboard Magazine’s 2021 Greatest Of All Time: Adult Alternative 25th Anniversary Chart.

*NB: Special guest on all shows outside of Bluesfest