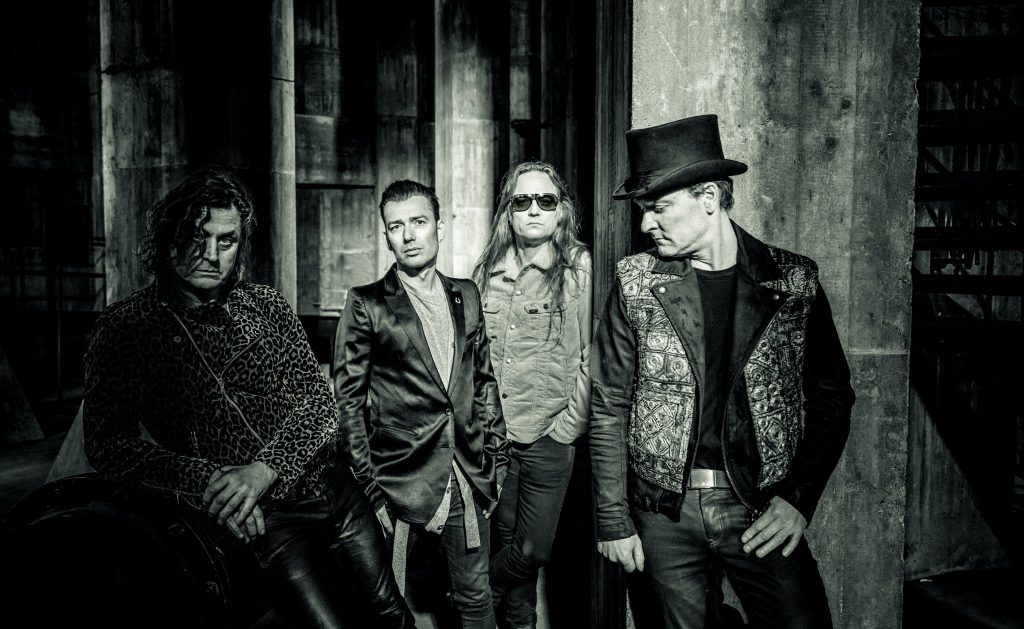 From Release: D-A-D began playing together in the early 1980s in Copenhagen, Denmark, under their original band name Disneyland After Dark. D-A-D released their first EP in 1985 and has now been together for more than twenty years, with only one change in the lineup, as Laust Sonne replaced former drummer Peter Lundholm Jensen in 1999. The band released their 12th album – A Prayer For The Loud in 2019. It was an album everyone had been waiting for since the album DIC.NII.LAN.DAFT.ERD.ARK got released in 2011, and it did not disappoint. It has everything from heavy songs, like Musical Chairs and Time Is A Train, to the ballad A Drug For The Heart, all with the classic D-A-D sound. D-A-D have continued a schedule of consistent touring performing to thousands of fans. With only a single line up change over 20 years ago, in a career spanning over 40 years, the live chemistry of the band is unparalleled! After a 30 year wait Australia will finally get to witness what European audiences have indulged in for the last three decades! Don’t miss this is a once in a generation tour for Australian fans with a career encompassing Setlist!

We gave D-A-D front man, Jesper a call to talk about the bands return to Australia, their live show, new music, and much more…

We are here because you are headed back but for the first time since 1990 so for someone coming to see you again or more importantly for the first time how would you best describe A DAD show?
I mean of course we’re classic work but we were born in the punk so there’s a lot of energy and that’s one thing and I mean we are rounded by all those years in that sense but main thing people would say is they haven’t grown old at all, that’s what they’re gonna say *laughs*.

Now it’s a greatest hits world tour but with so much material what’s it like putting a set list together these days for a tour like this?
I mean this is this this is the same for us all the time and then I mean we’ve got 200 songs I found out so there’s a lot to choose from but then I mean in our trade, in our life we almost you can almost make your own hit if you keep on playing the songs you love they will turn out to be hits and they will be hits on the setlist so it’s not like we sitting looking at Spotify numbers or anything to make a set list it’s often the songs that we enjoy the most to play and actually the main way of choosing songs for us. Of course we still love to play most of the songs from ‘No Fuel Left For The Pilgrims’ which will fit the Australian audience perfect.

What if anything do you remember about your last time here in 1990?
One long party that’s what I remember. I enjoyed it very much maybe it was just the jet lag but it felt like we were definitely around the world and we enjoyed it very much and there was I mean there was a lot of love, ‘No Fuel Left For The Pilgrims’ and the album after they did pretty good in Australia and I mean you know one of the biggest regrets has always been not coming back I can tell you that there has been Danish guys in Denmark on their knees every year since asking God for a tour in Australia and at last that happened and I must say with talking to all promoters and bookers, yeah but how about Australia?

Well it’s finally happening now of course most people would know you for these still amazing song ‘Sleeping My Day Away’ what do you remember about releasing that song and just watching it take off back then?
That was actually a big big festival the Glastonbury of Denmark it’s called  Roskilde festival and we were hired and actually funny enough we were playing the mainstage at a very good spot even before we had ‘Sleeping My Day Away’ so we were actually invited and we fit well without the biggest hit that came the year but what happened at that festival was that we played four songs, unreleased songs ‘Sleeping My Day Away’, ‘Jihad’, Girl nation’, and ‘Point of View’ those songs we played live for the first time and it is a bit of a gamble to play new songs in front of 70,000 people but we just felt these are good songs and this is the future we want to share it and it was very obvious even though people haven’t heard them before that if things change you could just feel OK these songs is definitely the future for us and it’s been there it’s been funny to watch a song like ‘Sleeping My Day Away’ that was we were in the summer house rehearsing and composing for the next album and this riff just we just kept playing this riff and we played it over and over of course we were smoking a little weed as well which makes this whole thing of course… I mean that’s how we do it, this riff kept playing in our heads so it’s been just as big as a hit in our heads as it’s been in the hearts of our fans ever since.

Now you’ve got twelve albums in your catalogue now what for you has been the biggest evolution in the way the band operates?
I think that one thing and that is before ‘No Fuel Left For The Pilgrims’ we were known as a country punk pop band, we changed drastically for the ‘No Fuel Left For The Pilgrims’ album, and what was learned from doing the drastic change was always make a drastic change. If you are stuck in a rut make a change and have new dreams, don’t try to reproduce yourself have new dreams and that’s always been rule number one. But I must say that when Laust joined twenty two years ago we released an album called ‘Everything Glows’ and that was like rebirth of D-A-D in many ways because we found out we really had the skills and because the old drummer left we had this feeling of is it over now and now with the new drummer and ‘Everything Glows’ that was like a gear shift in the D-A-D camp.

Your last album ‘A Prayer For The Loud’ came out in 2019 and it was about seven or eight years between albums but we don’t have to wait another seven years for a new one has there been work on new album to hear soon?
Definitely we are in the rehearsal sapce right now and composing and throwing riffs at each other. The thing is that there’s a big monster ahead of us and that’s the 40 years anniversary 24 and that’s like what a big ocean of nostalgia we are sailing into *laughs* but we wanna make some new songs and do some new stuff before this whole monster at the end of that year is swallowing us whole. At the moment the plan is just set ourselves free, maybe an EP maybe at an album but at least an EP before the whole 40th anniversary.

Now let’s look back over your career because it can be very easy to say what can change overtime and for you that’s about forty years like you said but what for you is the one thing that has always remained the same?
I think that been truly we’ve been trying to make, compose and work in new ways like OK let’s all make songs at home individually and then meet up and play them for each other and then how about making songs in the studio, or how about making songs only with acoustic guitars. This whole changing and a new way of doing it is inspiring but I must say the thing that has stayed the same is you meet up in the rehearsal space you play together and suddenly you find out what page everyone else is like, like human beings and you find out the psychology or where we all are. So I think the one thing that has remained the same is you gotta meet up, you gotta put in the work definitely.

I think that’s the perfect way to do it, so let’s look at the other side of that question. With your career now spanning almost four decades what is still on your list of things to do that you’d love to do you haven’t yet been able to?
Very good question, one must have dreams… let me see what’s my dream? I must say that this Australian tour is part of that dream because now it’s only Japan and South America touring wise. I think what I would like to do maybe is expand, D-A-D has expanded their skills and opportunities all the time I think keep on expanding so at the moment maybe I would like to look into collaborations, try and make music with others, as D-A-D but maybe have a duet or a special game or featuring stuff  like that open our lives in terms of other people. That’s why I’m going that music is something that you share not something that you hide away yes somewhere in there is the dream.

Lastly let’s look ahead to the future with the prediction what I like to do here is get you to finish this sentence for me… in 2023 D-A-D will?
Tour all the festivals in Europe and sitting watching the phone when Australia calls *laughs* that’s where I am at the moment, I’m doing things to just keep doing it. The only reason for going to Australia is so that I can come back to Australia that’s how I’m working at the moment.

Jesper, thank you so much for your time I’m really looking forward to the show here in Sydney.
Yes please come down.

Catch D-A-D on tour in Australia at the following dates:

Get your tickets here: https://metropolistouring.com/d-a-d-2022/ 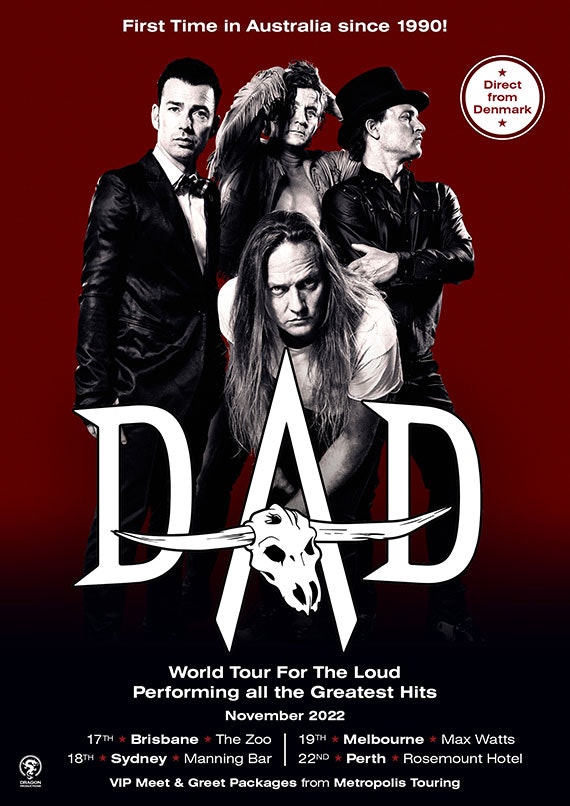