SLIPKNOT’S ‘KNOTFEST’ Set To Take Over Australia In 2023

KNOTFEST, the destination festival brand curated by SLIPKNOT, is continuing its ever-expanding global domination with the announcement of its next location – KNOTFEST AUSTRALIA in 2023.

The music and counterculture experience created by the multi-platinum sonic phenomenon SLIPKNOT, will hit the East coast of Australia starting on Friday, March 24th at Flemington Racecourse in Melbourne, before making its way to Sydney on Saturday, March 25th at Centennial Park and wrapping up in Brisbane on Sunday, March 26th at RNA Showgrounds.

A staple at KNOTFESTs all over the world, the KNOTFEST Museum will also be making its way to Australia for the very first time. The KNOTFEST Museum features a jaw-dropping collection of items from the band’s history and a fan-favourite attraction at the other KNOTFESTs around the globe. Tickets are strictly limited in each city. 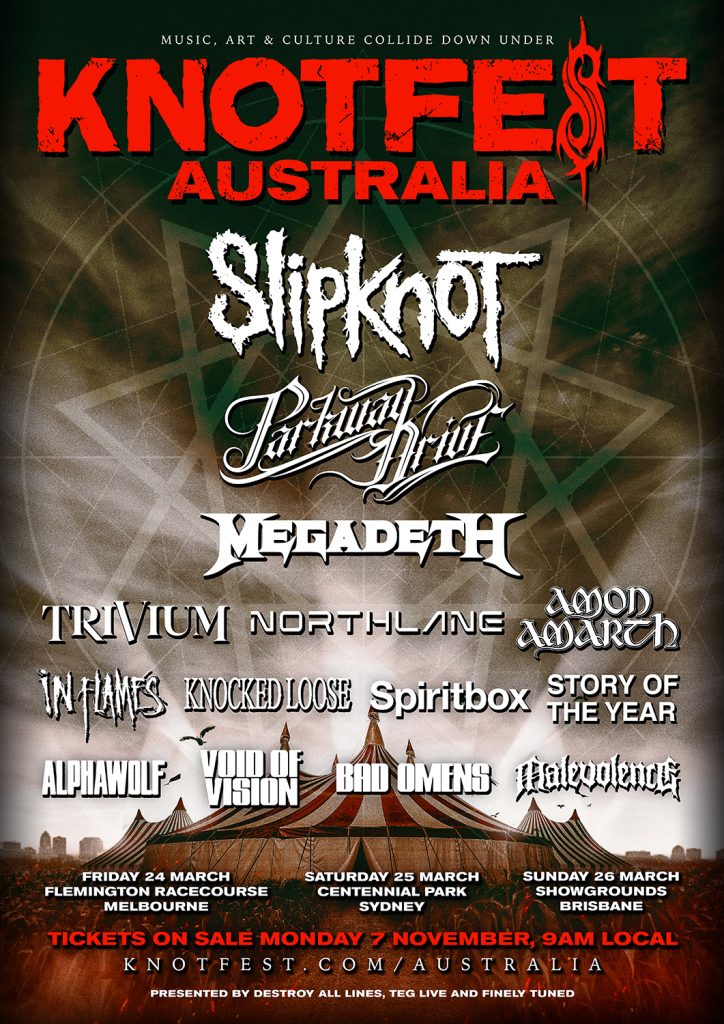 SLIPKNOT‘s latest album, ‘The End, So Far’ landed yet another #1 Official Album Chart position in Australia, their fourth straight #1 in a row, as the album racked up a string of global chart accolades, including #1 Album positions in the UK, Germany, Switzerland, Mexico and Top 10 in Japan, Finland, Sweden, Canada, USA, New Zealand, Portugal, Ireland, Belgium, Austria, France and the Netherlands. 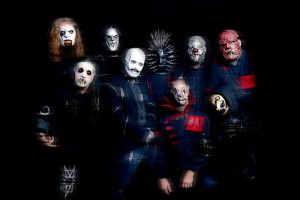 About SLIPKNOT: There was never a band like Slipknot, and there will never be another. Like a spore out of the Midwest, they’ve quietly bloomed into the most uncompromising, undeniable, and unique presence on the planet whose influence transcends genres and generations. Since sowing the seeds for revolution in Iowa during 1999, these musical outliers have captured a GRAMMY Award alongside 10 nominations, scored 12 Platinum / 41 Gold album certifications around the world, and logged over 8.5 billion global streams and 3.5 billion video views to date – unprecedented for a rock act in this generation or any other. Rolling Stone cited the seminal platinum-selling 2001 album Iowa among “The 100 Greatest Metal Albums of All Time,” while The Ringer attested, “They’re the most important heavy band of their era.”  In addition to marking the group’s third consecutive #1 debut on the Billboard Top 200, their sixth full-length album, WE ARE NOT YOUR KIND, bowed at #1 in twelve countries worldwide in 2019. Selling out shows on multiple continents, they deliver an irreplicable multi-sensory experience on tour and through their own festival Knotfest. With their seventh studio album, THE END, SO FAR, Slipknot are back, and nothing will be the same again.

About KNOTFEST: Knotfest is Slipknot’s own self-curated, destination festival brand, currently held in eight international locations; the US, Japan, Mexico, Finland, Germany, Colombia, Chile and Brazil. Designed as an immersive, unforgettable, ‘dark carnival experience’, the event invites you into Slipknot’s apocalyptic underworld where stunning visuals, fire breathers and nightmarish creatures on stilts set the stage for an intoxicating and memorable weekend of live music.

Stay up to date on all things KNOTFEST over at https://knotfest.com/australia/ and by following on socials.