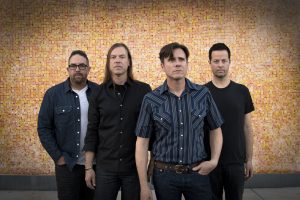 My Chemical Romance (aka MCR/My Chem) has announced Arizona’s finest Jimmy Eat World as support for their 2023 Australian arena tour.

The Mesa, Arizona quartet’s commercial breakthrough came with the release of Bleed American, with single “The Middle” hitting No. 1 on the Billboard Alternative Airplay chart and peaking at No. 5 on the U.S. Billboard Hot 100, where it spent 33 weeks total on the chart.

Futures, their follow-up album to Bleed American, featured single “Pain,” which also hit No. 1 on the U.S. Billboard Alternative Airplay chart, made Billboard’s Hot 100 (No. 93), and is RIAA-certified Gold. In October 2019, the band released their tenth album, the critically acclaimed, Surviving.

My Chemical Romance’s March tour, will be their first return to Australia since their appearance at Big Day Out festival in 2012.

Second shows in Brisbane, Melbourne and Sydney were announced off the back of their original shows instant sell out; tickets for the additional shows are on sale now from livenation.com.au.