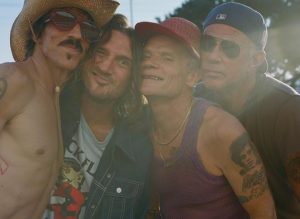 Legendary rock band Red Hot Chili Peppers have today announced their return to Australia for 4 massive stadium shows in early 2023. The tour will commence in Brisbane at Suncorp Stadium on January 29 before heading to Accor Stadium, Sydney on February 2, followed by Melbourne’s Marvel Stadium on February 7and concluding in Perth at Optus Stadium on February 12.

Red Hot Chili Peppers commenced their global stadium tour last month in Spain following the release of acclaimed new album Unlimited Love, with stops in London, Paris, Dublin, Los Angeles, Chicago, New York, and many more.  The tour marks the return of guitarist and all-round cosmic musician John Frusciante to the group, as they perform their career-spanning hits alongside tracks from their new album.

Joining the Australian tour is multi-platinum selling superstar, Post Malone. Among the best-selling music artists globally with over 80 million records sold across four career albums, Stoney (2016), Beerbongs & Bentleys (2018), Hollywood’s Bleeding (2019) and Twelve Carat Toothache (2022), Malone has won 10 Billboard Music Awards, three American Music Awards, one MTV Video Music Award, and has received six Grammy Award nominations. He holds several Billboard chart records: he is the first solo artist to top the Rap Airplay and Adult Contemporary charts, while Circles set the record for longest climb to number one (41 weeks) on the Adult Contemporary chart by a solo artist. His current single I Like You (A Happier Song) featuring Doja Cat is tearing up the Australian airplay and ARIA singles charts.

A Telstra Plus member pre-sale commences Wednesday July 6 at 10am in Brisbane, 11am in Melbourne and Perth, and 12pm in Sydney, running for 48 hours. Head to telstra.com/tickets for further details.

General public tickets go on sale on Monday July 11 at 12pm in Brisbane, 1pm in Melbourne and Perth, and 2pm in Sydney. For complete VIP, tour and ticket information, visit: livenation.com.au.

Red Hot Chili Peppers have sound tracked successive generations as not only one of the bestselling acts in music history, but also one of the biggest streaming rock bands in the world today. Inducted into the Rock and Roll Hall of Fame® in 2012, the award-winning Los Angeles quartet – Anthony Kiedis [vocals], Flea [bass], Chad Smith [drums], and John Frusciante [guitar] – have collected 6 GRAMMY® Awards, sold 80 million albums, generated 5 billion YouTube views, and gathered 22 billion Spotify streams, averaging 21 million monthly listeners on the platform.

Rolling Stone cited Blood Sugar Sex Magik, Californication, and By The Way on its coveted “500 Greatest Albums of All Time,” while “Under the Bridge” landed on the “500 Greatest Songs of All Time” in 2021. In addition to claiming a Star on the Hollywood Walk of Fame, 8 MTV VMAs, 5 EMAs, 4 American Music Awards, and 3 BRIT Awards, they’ve notably notched the most #1 singles of all time at Alternative Radio with 13 #1 hits. They’ve also performed to tens of millions worldwide, headlined Coachella and became the only band ever to sell out three nights at Hyde Park in London – moving over 200,000 tickets. Adorned by anthems such as “Give It Away,” “Under the Bridge,” and “Breaking the Girl,” the diamond-certified Blood Sugar Sex Magik celebrated its 30th anniversary in 2021.

Now the band’s seminal lineup returns with their new studio album, Unlimited Love, and a record-breaking Global Stadium Tour, kicking off a brand new generation of fans for the legendary group. 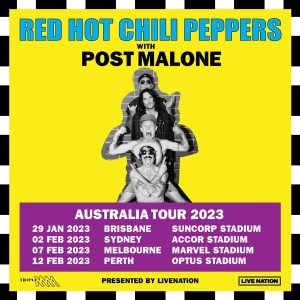 PRE-SALE AND ON SALE TICKETING INFORMATION (ALL TIMES LOCAL):

A Telstra Plus member pre-sale commences Wednesday July 6 at 10am until Friday July 8 at 10am – Head to telstra.com/tickets for further details.

Live Nation pre-sale commences Friday July 8 at 11am until Monday July 11 at 11am – see livenation.com.au for further details.

A Telstra Plus member pre-sale commences Wednesday July 6 at 11am until Friday July 8 at 11am – Head to telstra.com/tickets for further details.

A Telstra Plus member pre-sale commences Wednesday July 6 at 12pm until Friday July 8 at 12pm – Head to telstra.com/tickets for further details.