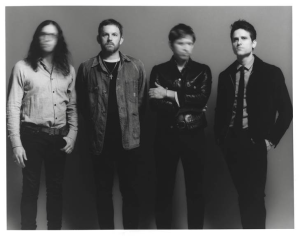 Kings of Leon have announced their brand-new October and November 2022 dates and a very special, new regional show in Mildura, which kick-starts the band’s Australian tour.

Tickets for all other shows are on sale now, visit TEG DAINTY
Caleb (guitar, vocals) said “As a band, we feed off the energy our audiences bring and the last time we toured Australia the atmosphere was electric. We can’t wait to get back down there and perform for you all again!”

Nathan (drums) said “Australia! Kings of Leon are coming back. We’re so excited, it’s been way too long, we cannot wait to get back with you guys and have a little rock and/or roll.  Get your tickets, come out, dance with us. It’s going to be a party.”

Paul Dainty, AM President/CEO said today, “We are thrilled that Kings of Leon’s new tour dates are confirmed for this year!  Fans don’t have long to wait and the addition of a brand-new regional show will kick-start the tour in a unique and exciting way when Kings of Leon ROCK MILDURA!”

Set lists from Kings of Leon’s recent North American tour have included songs from all 8 of the band’s albums.  Since Kings of Leon first captivated a global audience with the release of their debut EP Holy Roller Novocaine, back in 2003, Australia has been obsessed with this band of brothers (and one cousin). In 2008, Kings of Leon’s Only By The Night record – which contains the band’s three most-streamed songs in this country (the chart-topping Sex On Fire, Use Somebody and Closer – was Australia’s best-selling album of the year.

After honing their craft for 20 years, Kings of Leon have cemented their position as one of the world’s top rock acts, headlining international bucket-list festivals including Glastonbury, Coachella, Bonnaroo, Lollapalooza’s in Chicago, Berlin, Sao Paulo and Santiago, to name but a few, along with a record breaking 4 nights at London’s Hyde Park.
Don’t miss your chance to catch Kings of Leon LIVE this October and November!

For more information visit
https://www.tegdainty.com/
OR
Kings Of Leon (whenyouseeyourself.com)