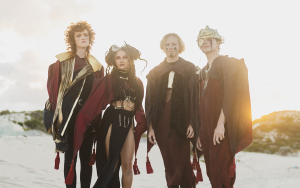 MTRBWY have been asked to premiere the new EP from WA band Moana and we happily obliged! You can check out the stream below.

Continuing a dance with the avant-garde and an exploration of a myriad of sonic and creative influences, Perth’s Moana return in 2021 with new EP, Feet In The Ground, Eyes To The Sky. The record: five tracks of expansive and immersive music constructed and delivered by some of the West Coast’s most seasoned, intriguing musicians in this realm.

As Moana’s new project following on from 2019’s breakthrough debut album In The Allure, this collection of music serves as a reminder of the group’s grip on engaging music, as well as being a perfect introduction point for newcomers to the fold.

Led by songwriter and vocalist Moana Mayatrix, the music the listener hears across the EP is wrapped up in textures and layers. Recorded with Andy Lawson (Debaser Studios) in Perth during the same time period as the In The Allure sessions, the environment Feet In The Ground… was made within was one that had its own magic permeating throughout. 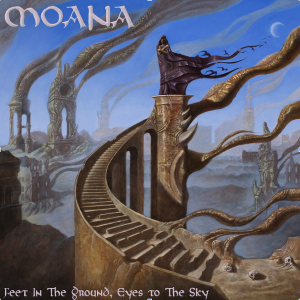 The material, originally planned to serve as B-sides to In The Allure, took on strength in identity on their own, with Moana deciding that they needed their own celebration. The sounds are dramatic, ethereal and bold; Moana’s vocals are primal in places, gorgeously vulnerable in others, while her band as a whole represents a tight, intimate performance dynamic.

“The EP is our most heartfelt creation to date. Feet In The Ground, Eyes To The Sky is an exploration of two parts…these two different sides saw the music evolving more conceptually than previous work and expanding upon the progressive and symphonic side of contemporary rock music. An exciting new layer upon our previous releases.

The prayer of this work will forever hold special meaning to me  – ‘Feet In The Ground’ – keeping grounded and strong in my spirit where [previous releases] ‘Kingdom’ and ‘Temple’ live as emblems of the self-discovery and transformation I have survived in my youth to be a strong, grounded, indigenous woman of the earth. And ‘Eyes To The Sky’; where my spirit is forever expanding, growing, learning and morphing in wild feminine expression, traversing the worlds beyond the worlds, searching for deeper, truer love and beauty. Free and fearless in her approach to her life and art.”

“Their combination of heavy psychedelic rhythm and the primal lyricism of lead singer Moana Mayatrix had the audience of the packed bar captivated from the beginning. Mayatrix presents herself as part PJ Harvey, part Patti Smith, part Jim Morrison and part otherworldly spirit as she chanted and moves about on the stage as if in some kind of transfixing shamanic ritual. She was raw, transgressive and also a little bit terrifying” Lachlan Hartmann, XPress

“Moana have pinned their sound as a transcendent juggernaut that consumes everything in it’s path…” Jasmine Kassis, Happy Mag

“The rapscallion bandits gave room for the freak in Moana to fly over their droning rhythms,.. Onstage they command as queens of the scene, enjoying the devilish freedom which is offered to stellar musicians whilst performing.” The Ink Grid

MOANA – FEET IN THE GROUND, EYES TO THE SKY – LAUNCH

EP: ‘Feet In The Ground, Eyes To The Sky’ is released Friday 5th November.