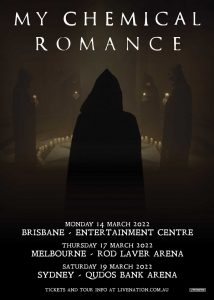 My Chemical Romance (aka MCR/My Chem) have today announced an Australian arena tour for 2022, the band’s first Australian shows since their appearance at Big Day Out festival in 2012. MCR will perform their highly anticipated shows at Brisbane Entertainment Centre on Monday, March 14, followed by concerts at Rod Laver Arena in Melbourne on Thursday, March 17 and Qudos Bank Arena in Sydney on Saturday, March 19.

Tickets for all shows go on sale at 12pm Thursday, May 27.

My Live Nation members can secure tickets first during the exclusive pre-sale beginning 11am Wednesday, May 26 until 11am Thursday, May 27.

Formed in NJ, My Chemical Romance made their debut in 2002 with the independently released album “I Brought You My Bullets, You Brought Me Your Love”. The band signed to Reprise Records the following year and made its major-label debut with 2004’s “Three Cheers for Sweet Revenge”, now 3x certified Platinum. The album contained the Platinum hit ‘I’m Not Okay (I Promise),’ the Gold-certified ‘Helena,’ and ‘The Ghost of You.’ Rolling Stone hailed the 3x Platinum “The Black Parade” as one of the top albums of 2006. Lead single ‘Welcome to the Black Parade’ topped both Billboard’s Alternative Songs tally and the UK Official Singles chart and is now 3x Platinum. The band toured extensively behind the album – appearing as characters from “The Black Parade” – and released the live album “The Black Parade is Dead!” in 2008. “Danger Days: The True Lives of the Fabulous Killjoys” was released in 2010 and topped Billboard’s Alternative Albums and Top Rock Albums charts. It was followed by a series of singles later released as “Conventional Weapons” in 2013.

Selling out stadiums across the globe and providing the soundtrack of a generation, Live Nation is beyond excited to welcome My Chemical Romance back to Australia!

“It’s with this landmark concert that MCR ceases to be a nostalgic act, and proves its mettle as a timeless, rock & roll band for the ages.” Rolling Stone

“As the crowd slowly left the venue, some fans had streaks of tears lining their faces — a fitting finale for a group that had been away for far too long.” Variety