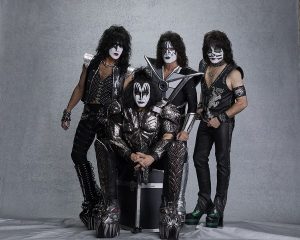 Promoters One World Entertainment and TEG Live today announced that rock n roll legends KISS will bring their spectacular ‘End Of The Road’ tour to Australia later this year.

In news that will thrill their legions of Aussie fans, the tour will commence in Perth on 14 November before playing Adelaide, two Melbourne shows, Sydney, Brisbane and a huge outdoor event in Townsville.

Pre-sale tickets will be available via Telstra Plus™ from 10.00am (local time) Tuesday 2 March. General Public tickets go on sale at 12noon (local time) Friday 5 March.

The ‘End Of The Road’ tour, which began in January 2019, is undoubtedly the biggest and best KISS show ever (and that’s saying something), receiving incredible reviews from both diehard KISS fans and the media at sell-out shows across the globe.

The Australian leg of the world tour, which was originally scheduled for November 2019, was unfortunately cancelled due to illness. With all concerts heavily sold and side-view tickets released to cater for the high demand, the postponement understandably gutted both the band and fans. To say today’s announcement has been eagerly awaited is an understatement!

Paul Stanley, Gene Simmons, Eric Singer and Tommy Thayer are now ready to rock’n’roll all nite with the KISS Army across Australia one last time.

Paul Stanley said: “There’s a light at the end of the tunnel and it’s BLINDING! We are finally coming back. The tour is now official and we will deliver nights that will go beyond all expectations. We are fired up and will count the days.”

Gene Simmons said: “Until we see you stay safe and be ready for us. We’re ready for you!”

The Rock & Roll Hall of Famers first visited our shores in 1980 during ‘KISSteria’, kick- starting a deep connection between the band and Aussie fans that has continued to thrive for more than four decades.

With countless timeless hits like ‘I Was Made For Loving You’, ‘Detroit Rock City’, ‘Love Gun’, ‘Shout It Out Loud’, ‘Lick It Up’, ‘God Gave Rock’n’Roll To You’ and the knock -em dead anthem that closes every KISS show Rock’n’Roll All Nite’, the KISS legacy has continued to grow, generation after generation.

Along the way the band has sold more than 100 million albums and through relentless touring has proven again and again why they are the most iconic live show in rock n roll.

So, Australia…. this is it.   Come and celebrate the extraordinary career and music of KISS.

“All that we have built and all that we have conquered over the past four decades could never have happened without the millions of people worldwide who’ve filled clubs, arenas and stadiums over those years. This will be the ultimate celebration for those who’ve seen us and a last chance for those who haven’t. KISS Army, we’re saying goodbye on our final tour with our biggest show yet and we’ll go out the same way we came in… Unapologetic and Unstoppable,” said KISS.

“Even if you’ve seen a KISS show before, you’ve never seen a show quite like this one.” Omaha.com.au

“KISS spare no cost when it comes to putting on one of the greatest rock shows on the planet. It’s flashy, it’s rockin’ and it has the energy and showmanship that made KISS a household name.”  OnMilwaukee

“An explosive thrill-ride.” The Oklahoman

“The spectacle KISS brings to the live show has never failed. It was an explosive, unapologetic, bombastic KISS concert that shows exactly why the band has lasted this long.”  Dress Reviews

“Whether it’s timeless, hard-hitting rock and roll, an unforgettable visual presentation or that relentless merchandising, KISS breathes fire in every aspect of its being, and, of course, very often literally.” iHeartRadio

KISS VIP Packages, which may include access to the KISS acoustic set and Q&A, invitation to the KISS Army Captain’s lounge, exclusive merchandise and premium seat locations will be available at all shows. Visit  www.kissonline.com for details.

Event goers can take advantage of Ticketek’s world-leading partnership with Afterpay. Available via the Ticketek app or website, Afterpay is the world’s largest buy-now-pay-later service, offering fans greater flexibility to pay for tickets in four equal instalments and secure seats with the first payment. 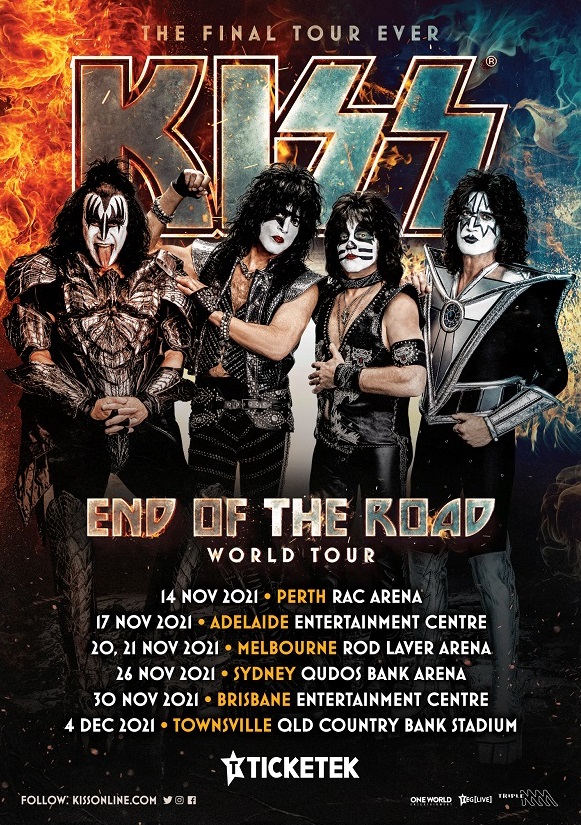