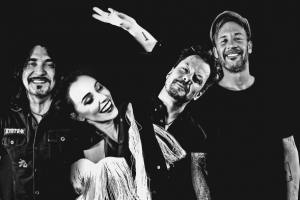 It has been 30 years since one of Australia’s most revered rock bands, BABY ANIMALS burst onto the scene with the release of their 8x Platinum, ARIA Award winning, self-titled debut album, featuring iconic hits ‘Rush You’, ‘Early Warning’, ‘Painless’  and  ‘One Word’.   The band celebrates this significant milestone with the announcement of their 30th Anniversary Tour, presented by Triple M, with special guests, KINGSWOOD. Tickets are on sale now – head to thebabyanimals.com.

The tour will kick off in Brisbane on June 25 with a show at The Triffid followed by a string of performances in Adelaide, Tweed Heads, Sunshine Coast and Melbourne across July and August.

Their debut single ‘Early Warning’ signaled the arrival of Baby Animals on to the Australian music scene in April 1991.  The track raced to Top 20 on the ARIA charts, winning the band an ARIA Award the following year for ‘Breakthrough Artist – Single’.   This huge introduction was hard to top but was followed by their second single ‘Rush You’  in August ,which proved to be equally as popular on radio and on the charts. 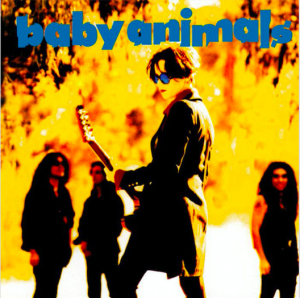 September 1991 saw the band release their much anticipated, self-titled debut album which went on to sell 600,000 copies in Australia (reaching 8x Platinum) and remained at No. 1 for six weeks.  In the years since, worldwide album sales have topped 800,000.  In addition to their ARIA for ‘Early Warning’, the band went on to win a further two ARIA Awards for Album of The Year and Breakthrough Artist – Album on the back of this successful debut. Suze DeMarchi was also nominated for Best Female Vocalist.

In addition to   ‘Early Warning’ and   ‘Rush You’,  the record also featured the hits  ‘One Word’, ‘Painless’ and ‘Ain’t Gonna Get’ and for more than 20 years, enjoyed the title of highest-selling debut Australian rock album.  In Australia, the album remains the biggest-selling local rock album sung by a female.  Nirvana’s ‘Nevermind’ was released in the same month and despite having sold 350,000 copies here, was kept out of the top spot on the Australian charts by Baby Animals.

In 1992 the LP also garnered much international attention with UK rock bible Kerrang!  declaring it one of the Top 25 albums of the year.  Van Halen extended an invitation to the band to join them on their ‘For Unlawful Carnal Knowledge’ Arena tour across America from January to May.  Bryan Adams also asked them to join him on his European tour and whilst overseas, the band picked up the ‘Best New Act’ at the inaugural 1991 Australian Music Awards.

Australian Rolling Stone magazine placed Suze on the cover noting the increased profile of women in Australian music and it was the first time they had put an Australian artist or group on the cover on the merits of a debut album.  Additionally, Baby Animals was later featured in The 100 Best Australian Albums, with the book explaining: “Baby Animals exploded on the Australian music scene with a bracing fusion of heavy metal bravura, a touch of glam dynamics and a look and a swagger.”

Melbourne four-piece band KINGSWOOD are special guests on this tour and their latest high-octane single ‘You Make It So Easy’ was recently added to Triple M.  This follows their previous singles ‘Say You Remember’ and ‘Bittersweet’. A dynamic force on stage, the ARIA nominated group has enjoyed strong success on the road in Australia and abroad, with a tour history that counts tours with AC/DC and Aerosmith, festivals including Splendour in the Grass, Falls Festival and Groovin The Moo; and multiple sold out tours across the country as proud achievements.

The 30th Anniversary Tour will add to the impressive total of over 800 live performances that Baby Animals have played throughout their celebrated career.

Tickets on sale now from thebabyanimals.com 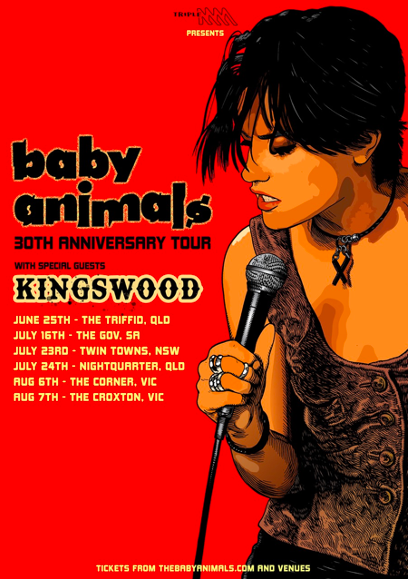