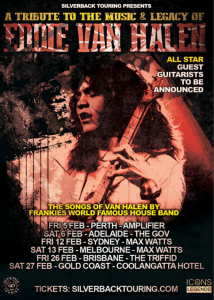 There are not many iconic and legendary guitarists who hold the same esteem, respect and legacy as Eddie Van Halen. A guitarist who shaped generations, shaped genres and blew our minds with the heights he took his instrument to.

The death of Eddie Van Halen on 6 October 2020 will forever be a date etched into the collective memories of not only rock fans, but music fans in general. Much like the deaths of significant music icons before him (think Hendrix, Prince, Freddy Mercury, Michael Jackson), Van Halen’s death will further cement his legacy and, with the benefit of hindsight, collectively allow us to listen and appreciate, in awe – like it was the first time hearing it, the genius of his work.

In a bitter sweet twist of fate, the Frankie’s World Famous House Band (from Sydney rock institution, Frankies Pizza) had been, for months, rehearsing a Van Halen show to showcase in early December, as part of the venues week long 8th birthday celebrations. As fate would have it, the world lost Eddie Van Halen and this show took on so much greater meaning, purpose and feel. To put it in simple terms, the show was a resounding success, with queues of punters lining Hunter Street for hours to get a glimpse of the show.

Featuring Joel McDonald (one of Australia’s most sought after guitarists), Jordan McDonald (The Art, Mi-Sex), Bobby Poulton (Wolfmother) and guest vocalists: Spencer Jones, Simon Hill and Frank Lakoudis, the band tore threw a set of Van Halen album cuts and hits which left the crowd begging for more. The show was pure intensity and energy with the band, and in particular, Joel McDonald, delivering a world class performance that would have made Eddie Van Halen proud.

Silverback Touring is delighted to be presenting the Frankies World Famous House Band across Australia as they perform the songs of Van Halen in one massive tribute to the great, Eddie Van Halen. The show will also feature a range of all-star guest guitarists in each city all joining the show to pay homage to EVH. Fans can expect a night of guitar hysterics, some classic Van Halen from both the David Lee Roth and Sammy Hagar eras as well as some album cuts that would not normally be heard live.

This show is an absolute must for any Van Halen, rock or guitar fan. This show is a celebration of music and rock ‘n’ roll, and the importance of Eddie Van Halen to both.