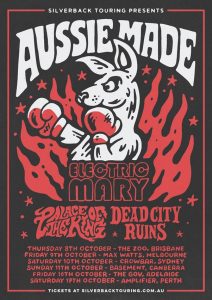 SILVERBACK TOURING knows the importance of live music, the effect it has on us all and the fact it’s something we have been sadly missing due to a Global Event that none of us would ever had predicted. Now it’s time to get the live industry back and firing.

‘’The local scene has always been high on our agenda. Our bands are world class and we are over the moon at the opportunity of being able to produce a National Tour with some of our best home-grown talent. Our vision is for this tour to be annual or bi-annual and it is to be used as the perfect opportunity to showcase just how solid Australian rock ‘n’ roll is; to current fans of the genre and new fans alike.’’ – SILVER BACK TOURING.

‘’Aussie Made’’ sees three of Australia’s Best Rock Acts ELECTRIC MARY, PALACE OF THE KING and DEAD CITY RUINS get together to reignite the live scene after a forced slumber.

ELECTRIC MARY are revered as one of the Australia’s best live bands. In the fickle fires of Oz Rock, “The Mary’s” are a rock band that just keep rolling on. It is clearly evident that ELECTRIC MARY haven’t rested on their laurels as they’re still working as hard as ever and continue to make new music with energy and raw power.

They’ve shared the stage – all around the world – with a who’s who of Classic Rocks biggest names. From Whitesnake to Judas Priest and Deep Purple along with Kiss, Alice Cooper, Motorhead, Def Leppard and co. Electric Mary are hungrier than ever. For the un-initiated, there’s only one thing left to say…come and see what all the fuss is about.

PALACE OF THE KING have played hundreds of gigs all around the world and released two EPs and three acclaimed albums, with a fourth on the way. The editor of The Age’s entertainment section, Martin Boulton, applauded the band’s blistering debut, White Bird/Burn The Sky. In a four-star rave, he wrote, “Just a little over two years into life as a band, PALACE OF THE KING have played a staggering 200-plus shows. All that time on stage and hanging out together has honed a mighty sound hellbent on rattling the rafters, shaking speakers and, quite frankly, emulating their many obvious influences.”

Yep, PALACE OF THE KING give a nod and a wink to the classics. PALACE OF THE KING dig the raves, but this is one band that’s more than happy to let the music do all the talking. Their message is loud and proud. They believe in the power of rock.

Melbourne’s DEAD CITY RUINS play Rock ‘n’ Roll like their lives depend on it. If you can imagine Black Sabbath, Early 80’s Iron Maiden and Phil Lynott era Thin Lizzy, thrown in a blender alongside antipodean grit, sweat and a fountain of beers, you’re getting close to the in your face, high energy live show delivered at brain splitting decibels these guys produce. They’ve opened for big guns like Skid Row, Ugly Kid Joe, Mastodon, Rival Sons, Wolfmother and more!

in support of the album touring with U.D.O (Udo Dirkschneider) for a 5-week tour, tearing venues apart and leaving the audience hungry for more.

Rounding out the line-up will be local supports in each city. If you’re up for a dose of true-blue rock ‘n’ roll, these shows are not to be missed.

Tickets on sale now from: https://silverbacktouring.com.au/aussie-made/