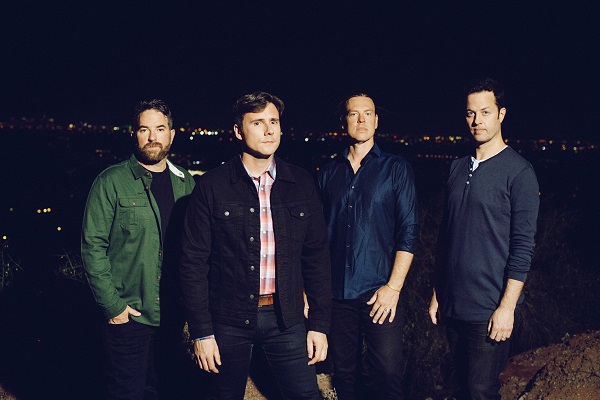 From Release: Jimmy Eat World announce the details of their 10th studio album, Surviving, to be released on October 18 via RCA Records. Surviving is the band’s most personal, ambitious album to date and front man Jim Adkins once again proves himself as one of the most prolific songwriters in rock & roll. The 10-track album, which was produced by the band and Integrity Blues producer Justin Meldal-Johnsen.

While he was at home, we gave Zach from Jimmy Eat World a call to talk about the band’s new album ‘Surviving’, song writing, touring, longevity, and more…

To start, it’s been about five and a half years since we last chatted, so let’s catch up, how have the last five and a half years been for you?
*laughs* I think they’ve been actually pretty good. You now we’ve put out a few records that we’re really proud of and I think for the band we feel personally that we’re in our prime in terms of making records and playing shows.

Now ‘Surviving’ has just been released, when you make an album and go through the whole process what’s the feeling like when it’s finally released and you can share it with the world?
It’s like really cathartic because we finished this in like the end of April we were done, so we while we’re making it we’re anticipating sharing and when it’s done we’re like OK we can’t wait to share this *laughs* but we’ve gotta sit and wait, but it’s been a lot of fun, it’s been a fun week we spent the week in The UK for release week and it’s been a blast just to see what the reactions are and see how the fans respond and it’s been fun.

For me, with you guys being one of my favourite bands, there’s just such authenticity to your music and always has been, in terms of song writing how does the band approach it to maintain this feeling?
Oh thanks so much. I think it’s just about doing what we’re interested in doing and not thinking too much about making certain types of albums or certain types of songs, we sort of follow our noses a little bit. I think there are sometimes conversations about well is this outside the bounds of what we should normally be doing, or is this not OK creatively? Usually when we’re asking ourselves these questions it’s like we’re usually working on stuff that’s pretty interesting and fun and with the help of our producer we kind of guide the process to see what fits and what doesn’t fit. I think that you want to continually push yourself and do new things but you also still want to do it from an organic place and I just feel like we have a pretty good balance from being able to cut ourselves some slack and allow ourselves some leeway but at the same time really making sure that the ideas and the sort of direction is coming from a natural or organic head space from us.

Then you’re writing songs that don’t come across as fake…
Yeah and the other thing we try and do too is execute recording and put the album together in a way that sounds human, that sounds like there’s human articulation happening that’s not being quantized or that’s not being overly edited to the point where it doesn’t sound real, so I think for us that element is very important because the sound of things and how things feel sonically certainly ties into that theme as well.

This is the band’s 10th album, what if anything did you do differently on this album compared to your previous works?
I think the one thing that we did that maybe I can categorise as both on ‘Integrity Blues’ and on this album was we started working with Justin Meldal-Johnsen our producer and one of the things that we learned working with him on ‘Integrity Blues’ is it’s such a huge benefit to have someone at the beginning of the process for us. A lot of the times in the past when we made records it would be we put together a certain amount of material and we would get it really far down the line creatively and then we’d bring someone in to kind of help us finish the job, and what we did with Justin on ‘Integrity Blues’ we started the process at the very beginning with him where we were showing him snippets of ideas, kind of from the ground floor for the record and OK what material should we be perusing and working on? So we learned that we worked really well with that and we also learned that we would say when do we want to put out an album and we’d set a date and work backwards from there and schedule it so we painted ourselves into a corner and we couldn’t just like in the past we’d wait until the album was done and be like “OK we’re done” *laughs* and then we feel like we work better that way when we have a time limit on ourselves, even if it’s arbitrary we just set a time and make a plan A and we don’t have a plan B and it’s worked really well for us.

The biggest question, when do you think we’ll see you back in Australia?
We’re working hard to get there this next year at some point, so that’s something that’s definitely on our checklist and we’re just waiting to see if we can make it happen  but we’re definitely hoping to be there sometime next year.

So sometimes it can be easy to say what’s changed over the years but what is the one thing that’s stayed the same over your time making music?
One thing that’s stayed the same? I would just say the thing that’s always remained the same is we’re a democracy and our decision making is democratic, all of our finances, everything that happens with the band is split four ways, so I think that in the creative process as well, we want to make sure it’s democratic to a point but we also want to make sure that everyone is excited about what we’re doing, if someone isn’t into it then we try to investigate why just so it’s unanimous and try and fix so everyone is OK we’re stoked. I think there’s a certain of patience that’s required, a certain level of respect you have to have for your band mates, and I think that’s something that we really try to stick to and I think if you have that atmosphere in a sort of partnership it makes it so much easier because I think people feel heard and I think people feel like they feel respected and understood and so I think that’s something that’s never changed.

It’s quite rare for a band to have the same members for almost twenty five years, what do you put this twenty five year relationship down to? Is it more of what you were just saying?
Right. Yeah, I think a lot of it is actually that, but I think a lot of that actually comes from that we started the band as teenagers and we were just friends and our only motivation was to just to play music and write songs and play music together and maybe play a show or enter a battle of the bands or something, that was our sort of head space then and it’s always been our motivation to just not overthink anything and just have fun, and I think that along the way we’ve found ways to kind of institutionalize that within ourselves and make sure that we’re adhering to the sort of I guess way that we did things back when we started.

What’s the one main thing you’ve learned about being in a band that you didn’t think was a part of it all when you first started?
Oh man that’s a good question, you know there’s lots of waiting around, I think that’s the thing that people don’t understand about being in a band, they think it’s like this non-stop fun and excitement and you really have to be patient, not only are you waiting around like I said earlier like to put out your material, you’re waiting around on tour in a hotel lobby or a backstage room and you’re just kind of waiting for the show to start. So there’s a lot of patience required and you don’t really think about that stuff, like OK we just did soundcheck, it’s 4:30 we’re done we don’t play until 9 now what do I do? *laughs* So you either try and find ways to fill your time or you just kind of sit and wait and it’s a lot of waiting.

After so long, what do you still enjoy about doing what you do?
Oh man, I enjoy so much of it, every album is a new challenge, every show is a new challenge, there’s always something that comes across that’s a way of testing yourself or a way of challenging yourself that I think I appreciate that so much, and the other thing that I feel like is just the travel, just the ability to go and to travel and see the rest of the world and enjoy learning about areas, cultures, different parts all over the globe we can appreciate and that’s a huge benefit to what we do.

Let’s look back to the beginnings, was there one piece of advice you were given when you started performing and making music that you still look back on and refer to to this day?
Yeah I would just say really think about what your motivation is for doing what you’re doing, I think that if you have the proper motivation, like for us we weren’t really expecting to build a career and make money and all of that stuff or have any kind of notoriety, and I don’t think that was ever our goal it just sort of happened, and I think that if you have the proper kind of motivation and willingness to work hard and not expecting a lot in return then you won’t be disappointed. It’s a lot of hard work whether we were back in our day or now, there’s so many people making music it’s so highly competitive that it’s a challenge in any way you look at it and you almost have to have a solid foundation of why are you doing what you’re doing and making sure that if that’s a strong reason then you wont be knocked off course as much, and that’s the one thing I felt like benefited from

Lastly let’s look ahead to the future, finish this sentence for me, in 2020 Jimmy Eat World want to…
I think we want to just continue making good music and playing good shows for our fans, we definitely want to come back to Australia, I think especially this next year for us is all about travelling and touring and there’s probably not gonna be a tonne of new music, so for us I think e want to just keep improving as a band live and hopefully have a long healthy tour