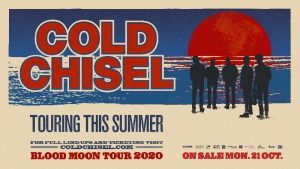 There’s nothing more Australian than hot sun, warm waves and Cold Chisel. The band’s classic songs like Khe Sanh, Flame Trees, Bow River, My Baby, Cheap Wine, Saturday Night and You Got Nothing I Want have become the soundtrack to our summers.

Since their legendary Last Stand way back in 1983, Cold Chisel has reformed for just four national tours, but they almost always played indoors and those gigs didn’t happen over the holidays.

Now, for the first time ever, this legendary Australian band will be playing 14 very special outdoor shows in Australia and New Zealand during summer. Between New Year’s Eve and the second weekend of February, they’ll do gigs on the beach, gigs by the river and gigs in the bush. You’ve never seen anything like it before. You’ll never see anything like it again.

It’s called the Blood Moon Tour 2020 – named after a rare lunar eclipse where the sun, earth and moon all briefly align before returning to their own orbits.

“You might get to see a blood moon once in your life”, explains the band’s main songwriter and piano player, Don Walker. “Apparently there’s going to be one just before dawn when we’re in Melbourne on this tour but we didn’t actually know that when we chose the name. Maybe it’s a sign.”

Fittingly the tour will boast a series of line-ups that are as rare and memorable as a Blood Moon. In Sydney, Cold Chisel will be joined by the mighty Hoodoo Gurus. Paul Kelly will be welcomed on four shows including Tamworth where he will be joined by country music icons Kasey Chambers and Troy Cassar-Daley. Both WA shows will feature a “Best Of The West” line-up that includes hometown heroes like Birds Of Tokyo, Jebediah and Gyroscope while other guests to appear on at least one show include The Teskey Brothers, Busby Marou and The Detonators. Beloved Kiwi band The Mutton Birds will reform just for the New Zealand gig while Birds of Tokyo will feature on seven different gigs and Magic Dirt on six. Every line-up is special.

And the locations are all special too. They include Glenelg Beach in Cold Chisel and Paul Kelly’s old hometown of Adelaide; the huge Mt Duneed Estate off Victoria’s Surf Coast, the opening concert at Bankwest Stadium on the Parramatta River (with Hoodoo Gurus) and New Year’s Eve down beside the ocean in Fremantle. Cold Chisel will even return to Orange, nearly 40 years since their last gigs there, for the first ever A Day On The Green in Orange.

“We’ve only done four tours since the early 80’s so we need to make each of them count”, explains the band’s frontman, Jimmy Barnes. “We knew that if we were going to get the band back together for another full tour it would have to be something really special. We wanted great line-ups and unusual places so that people would remember these gigs for a long, long time.”

The band has announced that Foodbank will be supported in various ways throughout this tour including by way of special auction items and fundraising collections at each venue on the tour.

“Last year Foodbank provided over 67 million meals to homeless people around Australia”, explains Ian Moss. “They did that by making use of good food and produce that would have gone to waste otherwise. We wish there wasn’t so much demand for their services but we’re pleased to do our bit to help them out.”

For all details on the Blood Moon Tour 2020 please see below.

Since forming in Adelaide in 1973 and blasting onto the national scene in the late 70s, Cold Chisel has created a uniquely Australian fusion of rockabilly, roughhouse soul, and blues. Between 1978 and 1983 the original line-up of Don Walker, Jim Barnes, Ian Moss (guitar/vocals), Phil Small (bass) and Steve Prestwich (drums) recorded five studio albums that became Australian classics. 1978’s self-titled debut and 1979’s Breakfast At Sweethearts initially received little support from mainstream media but eventually went gold based on nonstop touring. 1980’s East was their huge commercial breakthrough and 1982’s Circus Animals finally saw them top the charts. However by the time Twentieth Century was released in 1984 the band had already flamed out, making their unforgettable Last Stand in arenas around the country. In 1998 Cold Chisel reformed briefly for a chart topping album and tour called The Last Wave Of Summer. An ‘unplugged’ style run of dates called Ringside followed five years later, then in 2011 the group was working on a new studio album that became No Plans when Steve Prestwich sadly died from complications during surgery for a brain tumour. Eventually Charley Drayton agreed to step in to help complete what Steve began and he’s played drums with the band ever since, including on the record breaking Light The Nitro Tour and 2015’s platinum certified The Perfect Crime.

The band is currently putting the finishing touches to some more new music they recorded earlier this year with Charley and they plan to release at least some of it before the Blood Moon Tour 2020. Further announcements will be made about that in the weeks or months ahead.

Over the course of their career, Cold Chisel has sold almost 7 million albums across vinyl, cassette, CD, downloads and streaming. They’ve been inducted to the ARIA Hall Of Fame and received the Ted Albert Award for Outstanding Services to Australian Music. However their greatest achievements are their songs. It’s a body of work that has defined and echoed who we are. For over 40 years Cold Chisel has defied the odds, ignored the trends, and blazed their own trail. The band has endeared themselves to all sorts of Australians because their uncompromising attitude articulates our hopes, fears, alienation and humour, and because they are simply one of the most ferocious live rock ‘n’ roll outfits on earth.

Fans are reminded to only buy tickets by following the ticket links listed below. People who choose to ignore this clear advice and who instead use search engines like Google to find tickets typically get steered to unofficial reselling sites like Viagogo that often lead to rip offs.

The Blood Moon Tour 2020 is presented nationally by Triple M and MAX in association with Foodbank.

or earlier if pre-sale allocation exhausted

Tuesday, 31 December 2019
Fremantle Park, Fremantle WA
‘BEST OF THE WEST’
With Birds of Tokyo, Jebediah, Gyroscope, Carla Geneve
and The Southern River Band
Presented by By The C, Mix 94.5 and MAX
ticketmaster.com.au

Wednesday, 1 January 2020
Barnard Park, Busselton WA
‘BEST OF THE WEST’
With Birds of Tokyo, Jebediah, Gyroscope, Carla Geneve
and The Southern River Band
Presented by By The C, Triple M and MAX

Tuesday, 7 January 2020
All Saints Estate, Rutherglen VIC
A DAY ON THE GREEN
With Birds of Tokyo and Magic Dirt
Presented by Roundhouse Entertainment, Triple M and MAX

Friday, 10 January 2020
Rochford Wines, Yarra Valley VIC
A DAY ON THE GREEN
With Birds of Tokyo, Magic Dirt and The Detonators
Presented by Roundhouse Entertainment, Triple M and MAX

Wednesday, 5 February 2020
Wharepai Domain Tauranga, NZ
With special guests The Mutton Birds and The Bads and
introducing Sit Down in Front
Presented by Eccles Entertainment and The Rock (with support
from The Sound)