Once voted by the readers of Q Magazine as the “greatest front man of all time”, living legend Liam Gallagher will return to Australia and New Zealand in December as he celebrates the release of his massively anticipated second solo record, Why Me? Why Not? (out Sept 20).

Shows in Brisbane, Sydney, Melbourne, Perth and Auckland will give Australasian audiences a chance to revel in tracks from Gallagher’s untouchable back catalogue as well as taking in newer cuts from his more recent output.

Also on offer for Melbourne, Sydney and Brisbane fans will be a stoic support set from independent Scottish singer-songwriter Gerry Cinnamon, in the country to spruik his debut albumErratic Cinematic.

We all know the Oasis story by now: Manc lads discover the magic formula, pump out several anthems for a generation, release some of the highest selling (and most loved) albums of all time, define British guitar music, burn out in a blaze of glory…

Now, as we hurtle towards 2020, it’s a sheer delight to hear the unmistakable voice of Liam Gallagher producing music just as timeless as he did at the peak of Britpop’s heyday.

His debut solo album As You Were was released in October 2017, proving to be a critical and commercial success as it sold over 103,000 units in its first week and becoming the ninth fastest-selling debut of the decade in the UK.

Calling it a “debut” may seem a bit strange when we’re talking about an artist responsible for some of the most momentous albums in the history of recorded music, but Gallagher’s solo career to date has very much been about starting again with renewed vitality.

This attitude is on display through As It Were, a documentary released in June this year that documents the release of As You Were and the subsequent soul searching forced upon Gallagher in the wake of the break-up’s of Oasis, Beady Eye and several other personal relationships.

“I’m not doing this to be more famous, I’m f**king famous enough – you know what I mean,” he announces early in the film. “I’m not doing it for the money. I joined a band because I love music.”

With this typically confident catchcry in mind, Gallagher started work on his new record with super-producers Greg Kurstin and Andrew Wyatt, eventually pumping out Why Me, Why Not? and its stomping singles

‘Shockwave’ and ‘The River’. Both replete with oodles of the swagger and bluster that made Liam Gallagher a household name, the tunes are perfect precursors a much-anticipated sophomore release, both going down a treat at his recent Glastonbury performance.

In fact, if that show was anything to go by, audiences in Australia and New Zealand are in for something very special as Gallagher stacks his setlist with some of Oasis’ most well-known tunes and sends the likely lads and ladette’s into Supersonic ecstasy. 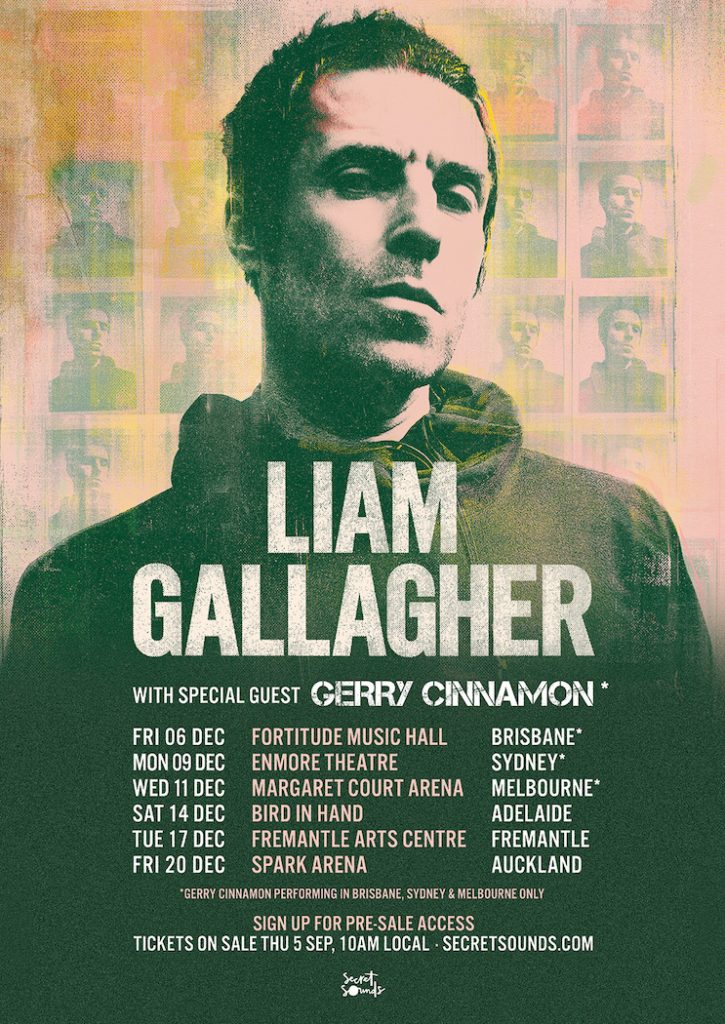