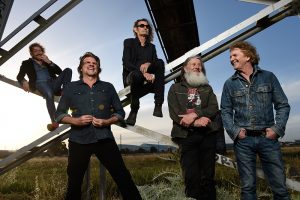 Age shall not weary The Beasts, although the years may condemn. After the emotional and frankly devastating loss of their fellow footsoldiers and Australian musical icons Brian Hooper and Spencer P Jones in 2018, Tex Perkins and compadres Kim Salmon, Tony Pola, Boris Sujdovic and Charlie Owen resolved to continue carrying the torch of the unstoppable life force that is the Beasts of Bourbon. Gathering all remaining members past and present to record a set of jams and covers that became the new album Still Here, and here was proof that there was life in the old dogs yet.

It couldn’t be The Beasts of Bourbon though, with Spencer sadly only making it on to one track before his passing, so with respect to their fallen comrades, a new but comfortingly familiar entity, The Beasts, rose from the ashes. Adding a new layer of primordial discordant ooze to the outrageous mythology surrounding them (as much of their own making as that of their ardent fans); The Beasts’ Still Here, featuring gems such as Tex’s ‘On My Back’ and ‘Just Let Go’ and Spencer’s prophetic ‘At The Hospital’ along with the likes of Kim’s ‘Pearls Before Swine’ and Boris’ ‘Don’t Pull Me Over’ – not to mention a couple of unexpected but highly appropriate covers from Zappa and Warren Zevon – saw them roaring back to life.

Unlike fellow mythological beasts the Gorgon, Hydra and Minotaur, these swashbuckling heroes of the Australian rock n’ roll pantheon hit the road for a sold out national tour earlier this year, proving that you stab them with your steely knives but you just can’t kill The Beasts.

Saddling up the horse again, The Beasts are hitting the road to farewell a year of new beginnings, old grudges and vintage hangovers with a national run of shows to cement their collective booze soaked reputations as the indestructible, if not immortal demi-gods of Australian rock n’ roll.