Two of Australia’s greatest rock bands, The Angels and Baby Animals will hit the road together this November and December for a string of shows nationally, ‘They Who Rock 2019’.

Fronted by Dave Gleeson and Suze DeMarchi respectively, two of the country’s most dynamic performers, fans can look forward to an ultimate night of rock from these incredible live acts – complete with a massive set list. Songs such as ‘Am I Ever Gonna See Your Face Again’, ‘One Word’, ‘Take A Long Line’, ‘Painless’, ‘No Secrets’, ‘Early Warning’, ‘Let The Night Roll On’, ‘Rush You’, ‘Dogs Are Talking’, ‘Back Street Pick Up’ and ‘Make It End’.

More than four decades into their remarkable journey, The Angels remain fierce and uncompromising.  The ARIA Hall Of Fame Inductees have produced 13 studio albums, eight Top 10 albums and 17 Top 40 singles but it’s their relationships with the audience that means everything to the band built via thousands of gigs over the course of their career.

They have been cited by bands such as Guns N Roses and Pearl Jam as having influenced their music and with founding members John and Rick Brewster, singer Dave Gleeson, drummer Nick Norton, and John’s son, Sam, on bass this line-up is sure to blow audiences away.

“The band is re-energised to the extent that I feel like it’s a young band again,” Rick says. “I feel like I felt when we started out.”

“We’ve survived all these years and gone on to make new music,” John adds. “Something we can be proud of.”

Dave Gleeson – who later formed The Screaming Jets – also loved The Angels. “Their songs from the late ’70s and early ’80s are more ingrained in me than even Jets songs, because they’ve been with me since I was 12 or 13 years old.”

“I’m definitely respectful of the fact that I’m not the creator of the Angels’ sound,” Dave says. “And I’m mindful of bringing that energy that Doc brought to the band. But it’s a real treat for me to be up there blasting out songs that I’ve loved since I was a kid.”

In 1992, Baby Animals celebrated their first No.1 album as their debut self-titled release reached top spot on the ARIA Albums Chart. Fast forward 27 years and Suze DeMarchi’s reputation as a fierce and inspiring front woman remains undiminished, her rapport with songwriting partner and guitarist, the legendary Dave Leslie, as dynamic as ever.

Baby Animals emerged on the Australian music scene in 1991 and delivered four massive hits off their debut album. They also picked up three ARIA Awards in 1992, for Album Of The Year, Breakthrough Artist Of The Year – Album and Breakthrough Artist of The Year – single for “Early Warning”. Their self-titled album was also named in the 100 Best Australian albums. Their second album ‘Shaved And Dangerous’ reached No. 2 and their 2013 album, ‘This Is Not The End’ reached top 20. 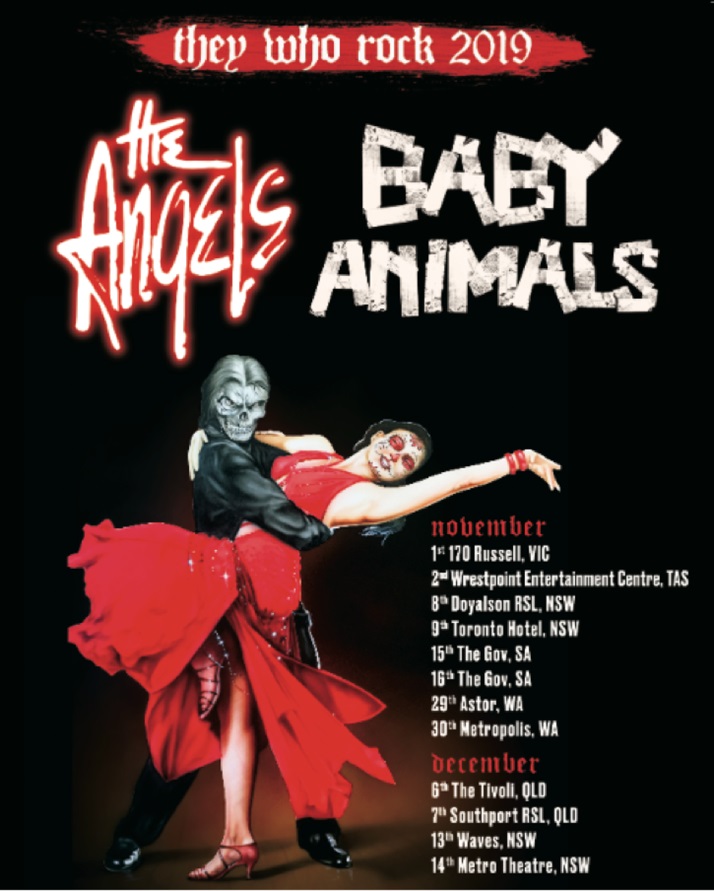