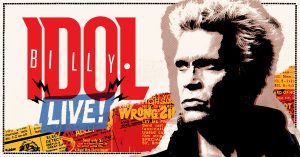 ‘White Wedding’, ‘Dancing With Myself’, ‘Rebel Yell’, ‘Flesh For Fantasy’, ‘Eyes Without A Face’… with a huge list of global hit singles to his name including 8 x US Top 20 hits, rock icon Billy Idol needs little introduction to fans. Frontier Touring are thrilled to welcome back the inimitable punk superstar and Grammy nominee for a series of special headline shows in January/February 2020 – Idol’s first tour of Australia since 2015!

Idol will be bringing his full band back down under, including his long-time collaborator and legendary lead-guitarist Steve Stevens. The iconic singer will perform at Brisbane’s Riverstage on Friday 31 January, followed by a show at Sydney’s Hordern Pavilion onSaturday 1 February.

In further news today, Melbourne fans will get their Idol fix on Wednesday 29 January, with the news that the singer is the first artist to be announced on the Australian Open’s 2020 AO Live Stage. Full line-up and ticketing information for the 2020 AO Live Stage will be revealed in October.

Brisbane and Sydney fans: be quick to secure your tickets when they go on sale Friday 16 August via frontiertouring.com/billyidol.

Idol’s place in rock & roll history is one of legend: born William Michael Albert Broad in Middlesex, England, his tale is an extraordinary one. From a childhood spent between Long Island, NY and the UK of the ‘60s/‘70s, Idol’s brash, bold and searingly honest voice has been embraced by fans worldwide. Idol first took his moniker back in 1976 as part of seminal London band Generation X. Years of in-your-face attitude and fire are all across hits including ‘To Be A Lover’, ‘Mony Mony’, ‘Sweet Sixteen’, ‘Cradle Of Love’, ‘L.A. Woman’, ‘Don’t Need A Gun’, ‘Hot In The City’, ‘Save Me Now’… songs that instantly catapulted Idol on a meteoric rise to stardom. Read more about his colourful life here.

Idol’s best-selling 2014 autobiography, Dancing With Myself, offers the sort of eye-opening anecdotes full of drugs, sex, and rock ‘n’ roll that only Billy Idol can tell. 2014 also saw his first album of new material in 10 years, in album number eight, Kings & Queens of the Underground.

Idol is currently on the road in the USA alongside Bryan Adams, while October will see him perform a 10-date Las Vegas residency. As well as his trip down under, 2020 will also see Idol receive a star on the Hollywood Walk Of Fame.

Joining Billy Idol on all dates is Melbourne rockers The Delta Riggs. The stomping four-piece are no strangers to Aussie rock fans, with their latest single ‘Reality’ released just last month. In September, the Delta Riggs will head to the UK for a series of shows in support of their upcoming fourth album Modern Pressure, due out Sept 6, before joining Idol on stage next Jan/Feb.

Also performing in Brisbane and Sydney are Sydney’s The Kids. Channelling their teenage angst into their music, The Kids’ rage fuelled rock embraces the punk and grunge greats of the past, with their inspirations ranging from Nirvana, Dead Kennedys and Bad Brains, to Generation X, Black Flag and the Sex Pistols. Check out singles ‘I Just Wanna Be Happy’ and ‘I Thought My Family Was Rich’.

Don’t delay in grabbing your tickets to Billy Idol, live in Brisbane and Sydney this summer!

Patrons are advised to purchase tickets only through authorised ticket sellers.
We cannot guarantee any ticket purchase made through any means other than
the official ticketing agents listed on the Frontier website.