“I wanted to do something bold and bright”, said Rzeznick about the record. “I wanted to sing about the need for human connection and the constant change we go through as people. This piece of work embodies those themes and I think we can all relate.”

Last week, the band released their colorful new music video for the album’s first single “Miracle Pill”. Directed by Ed Gregory and Dan Cooper, the piece was hailed as a “vibrant pairing of lyrics and visual” by Billboard. “Miracle Pill” currently ranks as the US’ Hot AC Radio’s most added song and the official music video can be watched now HERE.

With over 30 years together as a band, and over 12 million albums sold, Miracle Pill finds Goo Goo Dolls at the top of their game. The entire collection of songs delivers musicianship that is as engaging as ever, emotional and intimate, relatable lyrics that reflect on the current landscape of instant gratification and relief that everyone seems to be seeking. See below for a full track listing. 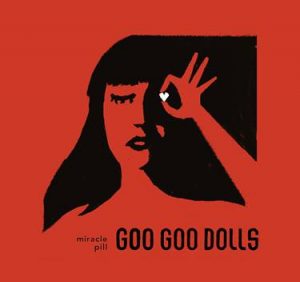 Formed in Buffalo, NY during 1986 by John Rzeznik and Robby Takac, Goo Goo Dolls quietly broke records, contributed a string of staples to the American songbook, connected to millions of fans, and indelibly impacted popular music for three-plus decades. Beyond selling 12 million records worldwide, the group garnered four GRAMMY® Award nominations and seized a page in the history books by achieving 14 number one and Top 10 hits at American Hot AC—“the most of any artist.” As a result, they hold the all-time radio record for “Most Top 10 Singles.” Among a string of hits, “Iris” topped the ARIA Chart in 1998 and stayed in the Australian chart for more than 30 weeks, as well as clutched #1 on the US Hot 100 for 18 straight weeks and would be named “#1 Top 40 Song of the Last 20 Years.” In 1999, album Dizzy Up The Girl went on to become ARIA certified Platinum and quadruple-platinum in the US. Goo Goo Dolls haveattracted wide praise from the likes of People, Huffington Post, Noisey, Consequence of Sound, and more and their music has been covered by everyone from Taylor Swift to Leona Lewis. Among many accolades, John received the prestigious “Hal David Starlight Award” in 2008 as well.

Following a sold-out 2018 twentieth anniversary tour in celebration of Dizzy Up The Girl, Goo Goo Dolls wrote and recorded their twelfth full-length album, Miracle Pill — ignited by the first single and title track “Miracle Pill” and kicking off a bold and bright new era in the process. Miracle Pill arrives on September 13th, 2019 via Warner Records.

CONNECT WITH THE GOO GOO DOLLS