ONE ELECTRIC DAY EXPANDS NATIONALLY IN 2019 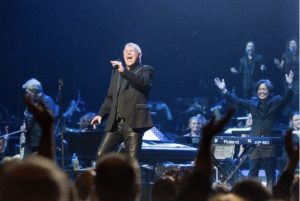 ONE ELECTRIC DAY EXPANDS NATIONALLY IN 2019

As it heads into its seventh year, one of Melbourne’s favourite one-day festivals, ONE ELECTRIC DAY, is going national. In an exciting coup for music-lovers, the all-Aussie rock festival, which has sold out annually since its inception, will be also heading to Launceston, Sydney, Brisbane and the Barossa Valley in November and December this year. Headlined by the incomparable John Farnham with special guests James Reyne, Jon Stevens, Vanessa Amorosi, The Black Sorrows, and a special reformation by Southern Sons, these are shows that no music fan should miss.

ONE ELECTRIC DAY launched in Melbourne in 2013 and was a sell-out. In recent years, tickets have been snapped up within minutes of the show going on sale, making it one of the most highly anticipated music events on the Victorian calendar. Each year the 10,000-plus crowd rock out to some of the biggest names on the touring circuit today. Organised by the promoters who bring Australian audiences the revered Red Hot Summer Tour annually, ONE ELECTRIC DAY always bills the best of the best.

Promoter Duane McDonald says he is excited to expand ONE ELECTRIC DAY nationally in 2019. “There is always such a buzz around the Melbourne show,” he says. “It sells out very quickly in Werribee, and every year we get requests from interstate on when we will be bringing ONE ELECTRIC DAY further afield. This is such an exciting opportunity for us to share some of Australia’s best talent with audiences around Australia, and we are stoked to be launching the national ONE ELECTRIC DAY series with John Farnham. We expect audiences in Launceston, Sydney, Brisbane and the Barossa will embrace ONE ELECTRIC DAY the same way Victorian music-lovers have and help us make this an annual event in their towns! Let’s get rockin’.”

Considered one of the best male vocalists of all time – by both fans and fellow musicians – John Farnham has had an incredibly versatile career. His 1986 album Whispering Jack was the first record to sell over a million copies in Australia and its chart topping single You’re The Voice cemented the honey toned solo artist as ‘the voice’ of the country. Over the next several years he released hit after hit, including Pressure Down, Reasons, A Touch of Paradise, Age of Reason, Two Strong Hearts, Angels, Talk of The Town, Chain Reaction, Burn for You, Have A Little Faith (In Us) and That’s Freedom to name a few.

James Reyne has been treading the boards in the rock halls of Australian music for decades. From his time fronting the legendary Australian Crawl through to his successful solo career, James’ music is part of Australian history. As a prolific songwriter and strong vocalist, it’s no surprise that James has won accolade after accolade for his contribution to music. When Australian Crawl split in the mid-1980s, James embarked on a successful solo career. James Reye stands alone within an elite cluster of exclusive Australian performers. James will be performing Sydney, Werribee and Brisbane.

For lovers of great music, a concert experience with Jon Stevens is up there with the very best. From his Noiseworks days – and hits such as Welcome To The World, No Lies, Touch and Hot Chilli Woman – to fronting The Dead Daisies and INXS, he has made an indelible impact with his amazing vocals. Jon also has an incredible solo catalogue, his live shows are dynamic, high energy and will keep audiences on their feet. Jon’s current live show is packed full of hits and we are thrilled to have him return

Vanessa Amorosi’s recent return to the Australian stage has been embraced by audiences. Her debut album The Power (2000) demonstrated Vanessa was a force to reckon with – it notched up six nominations at the ARIA awards and saw her sing at the Sydney Olympics. It was the breakthrough Top 10 hit Absolutely Everybody that made her a household name, it stayed in the charts for six months, went certified double platinum and charted in Europe. In recent times Vanessa has returned to Australia with brand new music and is ready to unleash a full album of extraordinary material in late 2019. She has sold over two million records and is a force to be reckoned with!

The Black Sorrows are another legendary band on the 2019 line-up. With unforgettable hits such as Harley & Rose, Dear Children, The Chosen Ones, Never Let Me Go and Chained to the Wheel to Hold On To Me and New Craze, The Black Sorrows have sold more than a million albums worldwide, toured Europe (to sell-out shows) and won an ARIA for Best Band. Joe and his fantastic band will have audiences on their feet as he performs the hits that defined a generation. The Black Sorrows perform in Launceton and Barossa Valley.

Reforming after 22-years, Southern Sons are back together for ONE ELECTRIC DAY. In the 1990s their ARIA-nominated debut self-titled album hit #5 on the charts and spawned smash hits Heart In Danger, Hold Me In Your Arms, Always & Forever and Waiting For That Train. They were one of the most loved bands of the 90s and all four members – Jack Jones, Virgil Donati, Geoff Cain and Peter Bowman – have banded back together for these special events.