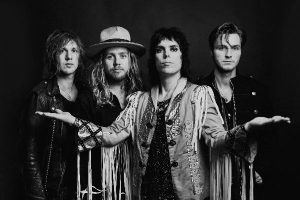 Due to overwhelming demand, UK glam-rockers THE STRUTS have announced a second Melbourne show at The Corner Hotel on Thursday August 22. Currently on their Young & Dangerous world tour, the band return to Australia this August, with tickets completely sold out for their first Melbourne show at The Corner, and selling fast for their remaining shows at Sydney’s Factory Theatre and Brisbane’s The Triffid.

Tickets for the second Melbourne show go on sale at 11am on Friday 10 May.

My Live Nation members can secure tickets first during the exclusive pre-sale beginning 10am on Thursday, 9 May until 10am Friday, 10 May.

With worldwide hit songs “Body Talks”, “Could Have Been Me” and recent single “In Love With A Camera” fast becoming rock anthems, it’s been a wild and fast ride for THE STRUTS, having only recently been in Australia as support for Greta Van Fleet. The band won over a whole legion of fans with their spectacular stage show, adding their own surprise headline shows in Melbourne, Brisbane and Sydney that had all cities in a buzz.

Having opened for The Rolling Stones, The Who, Guns’n’Roses Foo Fighters and Motley Crue, THE STRUTS’ latest album Young & Dangerous is out now on US label Interscope.

Don’t miss one of the most exciting live rock’n’roll bands on the planet!

The Struts have partnered with PLUS1 so that $1 from every ticket sold will go to Beyond Blue and their work providing information and support to help everyone in Australia achieve their best possible mental health, whatever their age and wherever they live. beyondblue.org.au.

TICKETS FOR 2ND MELBOURNE SHOW ON SALE 11AM FRIDAY, MAY 10

2nd Melbourne Show – Live Nation pre-sale begins 10am Thursday, May 9
until 10am Friday, May 10