SNOW PATROL Return To Australia ‘Live And Acoustic’ This August 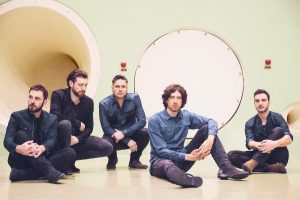 Irish rockers SNOW PATROL return to Australia this coming August 2019 on the ‘Live and Acoustic’ tour which visits Perth, Brisbane and Melbourne, and sees the band performing for the first time at the Sydney Opera House Concert Hall.

My Live Nation members can secure tickets first during the exclusive pre-sale beginning 11am Friday, May 10 until 11am Monday, May 13.

Fresh on the heels of their North American stadium tour with Ed Sheeran,  and appearances at Lollapalooza Chile and Brazil , the Australian shows see Snow Patrol performing in a ‘Live and Acoustic’ mode as a 3-piece featuring singer and guitarist Gary Lightbody, Johnny McDaid on Guitar, piano and vocals and Nathan Connolly also on guitar and vocals.

Performing songs live as you’ve never heard them before, the band will be playing all your favourites from classic Snow Patrol albums including ‘Run’, ‘Open Your Eyes’, and ‘Chasing Cars’, alongside songs from their 2018 release ‘Wildness‘, which was their first studio album in seven years.

Over a twenty plus year career, Snow Patrol has carved out a unique place for themselves. Since their 1998 debut, ‘Songs for Polarbears’, which Pitchfork hailed as ‘an impressive piece of work’ their melancholy anthems of heartbreak and separation have mended hearts, and the band have emerged as musical prophets striking a chord in the minds and memories of listeners over six ground-breaking, confessional albums.

The band has racked up an impressive number of critical and commercial accolades, including 15 million global album sales, 1+ billion global track streams, 5 UK Platinum Albums, and are Grammy and Mercury Music Prize nominated.  With an equally huge fan base here in Australia Snow Patrol have been omnipresent across our airwaves for decades, have received 8 x Platinum ARIA accreditations and continue to be one of Australia’s biggest selling International artists.