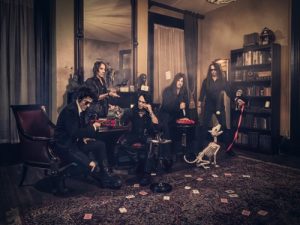 The world’s fastest growing independent rock label, Golden Robot Records, continues it’s upward trajectory into 2019. Starting the year off with a bang, the label recently welcomed guitar icons John Sykes and Gilby Clarke to the family as well as Alt Rockers, Trope, and is now thrilled to announce their latest signing!

‘We are beyond excited to announce that we have signed with Golden Robot Records. The label is the perfect balance between old-school way of thinking with digital age sensibilities. We can think of no better company to release our third chapter of United World Rebellion and our first record with ZP.,” says Skid Row bassist, Rachel Bolan.

‘We are honoured to welcome Skid Row to the GRR family! They have always remained true to their fans with authenticity and passion. We are more than excited to be part of their next chapter and journey with a brand new album’!
Mark Alexander-Erber, Golden Robot Entertainment Group Founder and President.

Skid Row burst onto the scene with their iconic self titled debut album in 1988. Fuelled with enough punk and metal attitude to take down any band on the West Coast but enough melody to battle them for airplay dominance.  Top Ten singles, Gold and Platinum sales in too many countries to count and a #1 album on the Billboard chart! They ruled the world for the next 8 years until an ill advised South American tour in 1996 brought the party to an end.  The band was finished, but the core camaraderie never died.

In 2000 Skid Row returned to the big stage. Opening for Kiss, they were reinvigorated. Supercharged underdogs who needed to come out fighting to prove themselves once more. With a new frontman the renewed Skid Row played hundreds of shows, with every night being a hard fought battle to win new fans and convince the old ones they still had it. Two albums and two EP’s later, the war was won. Skid Row have reestablished their position as one of rocks finest acts with authenticity and the fact they have stayed totally true to themselves and their fans.

With the current musical climate the way it is, Skid Row will continue down the EP path. “The idea really appealed to me,” says Bolan, “especially with the constantly changing musical climate.  I like the idea of a steady flow of new music, as opposed to releasing a full-length album then riding it for the next two years.”

Armed with powerhouse vocalist ZP Theart, Skid Row in 2019 is as potent as ever. The twin guitar attack of Dave ‘Snake Sabo and Scotti Hill is as legendary as any other classic duo and they are cemented in place by the massive driving force of Rachel Bolan on bass and Rob Hammersmith up the back on drums.

The band are currently in the studio recording the third in their United World Rebellion EP series and it will be released via Golden Robot Records in late 2019.

Skid Row will be playing in Europe throughout June and July appearing on festivals including Bang Your Head and Rockhard in Germany, Download UK, Norway Rock, Sweden Rock and more!