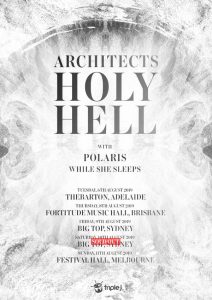 Britain’s metalcore masters ARCHITECTS have officially SOLD OUT their show at Sydney’s Big Top on Saturday, August 10 and due to overwhelming demand have confirmed an additional date on Friday, August 9.

As fans gear up for their arrival in just a few months, Architects have today confirmed that POLARIS and WHILE SHE SLEEPS will join them across their 5 date Australian tour, which kicks off at Adelaide’s Thebarton Theatre on August 6 in support of the band’s eighth album, “Holy Hell”.

Tickets for second Sydney and all other shows are on sale now.

Currently on tour throughout the USA, 2019 has already seen Architects tour “Holy Hell” throughout Europe, the UK and Canada. Their explosive live show has been described as a “pummeling and passionate set” (Deadpress) leaving fans craving more after each thrashing riff and monstrous kicks. These select Australian shows will be their first tour since 2017 which saw them sell out shows across Sydney and Melbourne.

Their latest record “Holy Hell” marks the band’s first release since the untimely passing of Tom Searle, Architect’s founding guitarist, principal songwriter and twin brother to drummer Dan. Having found a way forward, the band spent 2017 recording what would become the 11-song album, with Dan and guitar player Josh Middleton handling production. “For me, broadly speaking Holy Hell is about pain: the way we process it, cope with it, and live with it,” Dan offers. “There is value in pain. It’s where we learn, it’s where we grow.”

Architects will be joined by Australia’s very own Sydneysider’s Polaris, who have been taking the world by storm. This year has already seen the metal heavyweights tour alongside Architects across Europe and the UK, during their massive arena run in January/February, as well as playing Download Festival in both Sydney and Melbourne. In 2018, Polaris cemented their place in the global scene – touring alongside Parkway Drive and a show-stealing appearance at their second Unify Gathering; not to mention selling out all three of their Australian headline tours in less than 12 months. Their debut album “The Mortal Coil” stunned audiences and critics upon its release, taking #6 on the ARIA Album Charts and #1 on the Independent Albums Chart and scored triple j’s coveted Feature Album spot.

Currently on tour in the US with Architects, Sheffield-based quintet While She Sleeps will be kicking things off each night on the Australian leg with their dizzying blend of crushing metal, guttural hardcore and arena-worthy hooks. Their fourth album “SO WHAT?” has proven to be another defiant step forward for the band, with its first single ‘Anti-Social’ unleashing an unstoppable force of clattering riffs, bruising breakdowns, snarling lyrics and big-ass singalongs. While She Sleeps were recently here for this year’s Unify Gathering where they were pinned as a festival highlight for their exclusive play. And having spent more than a decade redefining modern metal, it seems that 2019 is the year for the boys.

With Architects’ first Sydney show now SOLD OUT fans should act quick to secure tickets as allocations are strictly limited. Don’t miss Architects with support from Polaris and While She Sleeps this August.

2ND SYDNEY & ALL OTHER SHOWS ON SALE NOW