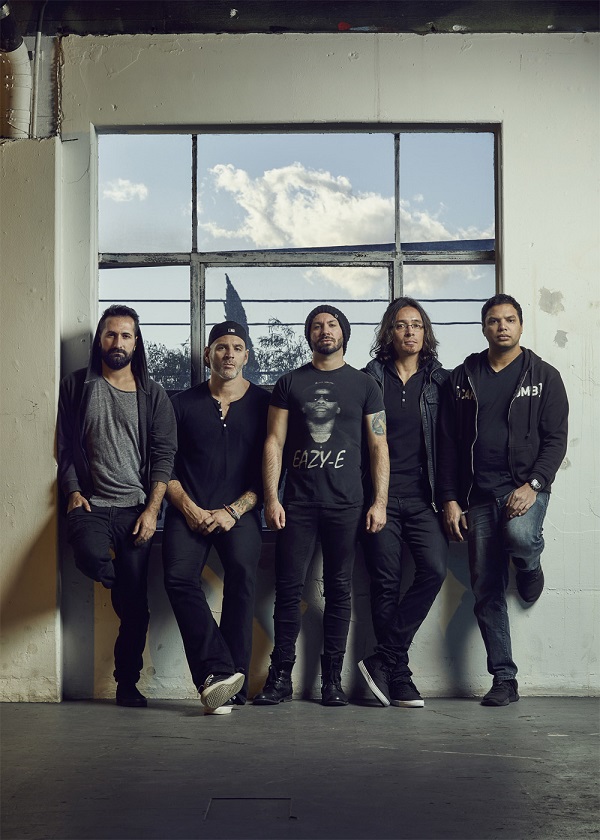 “…the name itself hopefully let’s people know that despite the seriousness of the level of hard work we put into the record and I guess in some ways how serious the music sounds, we as people in the band we do not take ourselves seriously whatsoever, we’re a bunch of goofballs and we definitely want that to come through despite the music itself.”

From Release: Periphery IV: HAIL STAN is the first release to follow the band’s 2017 GRAMMY® Award nomination in the Best Metal Performance category, for Periphery III: Select Difficulty album opener The Price Is Wrong. The 2016 album tallied 35 million cumulative streams and marked their third consecutive debut in the Top 25 of the Billboard Top 200. In Australia, the album was their first to crack into the top 10, debuting at #8 on the ARIA chart. It represented the apex of a tireless decade-long grind. Along the way, the band graced the covers of Guitar World, Revolver, Modern Drummer, Bass Player and more. In between the touring, endorsements and appearances, they also launched a summer camp of their own, Periphery Summer Jam.

At home in Baltimore getting ready for tour, Matt gave us a call to talk about the band’s newest album ‘Hail Stan’, its creation, its name, performing live, and much more…

We’re here as Periphery 4, Hail Stan is on the way. So as it is number four can you give us four words that you feel sum it up perfectly?
It is fucking heavy. How’d I do? *laughs*

What if anything did you set out to do differently this time around?
I think the biggest thing was we didn’t restrict ourselves to any sort of time frame, we took basically a year off from touring completely and gave ourselves as much time as we needed to write this record. We happened to be able to do it within the year window of time but had we not finished writing and recording within the year time frame we would’ve kept going until we had it right. So I think that was the biggest thing is that we committed ourselves to that time, we wanted to realty not feel any pressure one way or another and we wanted to be able to see what it was like writing music without any major pressure like that which was definitely something very new for us.

The album is straight up kick ass. In terms of your playing it’s off the charts, do you feel you need to push yourself further with each release or are you so comfortable that it’s just a natural progression?
Oh no I’m definitely not comfortable *laughs* this stuff is definitely really, really, really challenging to play and I appreciate the compliment there. It’s really challenging to play but I think for all of us one of the results of writing a new record is we end up pushing ourselves and pushing each other both creatively and even physically to be able to play the parts that we demand, and the way that we write when it comes to the drums at least we program the drums when we’re writing the demos initially and when we program the drums parts we’re really not too concerned with whether or not I have the current abilities to perform those parts, they have to be humanly possible but when we write we just write for what sounds best and then whatever is happening from there is once I actually take those parts to my drums and really sit down to play them for the first time then the learning process begins, we write without boundary and that forces us to really have to pick up some slack and learn the parts the way that we want them to sound. So in that it definitely pushes me and it pushes my abilities and forces me to get better and because of that I’m always learning and improving when we get into a writing and recording stage of the year.

Now I’ve discussed names with Mark before and you missed the awesome use of Peripha-THREE now how could you not use PeriphFOURy or FOURiphery, what’s going on?!
You know you think that we probably would and out of all people Mark would be the one to coin the best name because he’s pretty brilliant with puns, he just happens to be very gifted in that area of comedy, but we’re a bunch of immature children and you should’ve seen the list of names that we actually did throw around I don’t think any of them are safe to say here, but I will say doing something like PeriphFOURy or something along those lines, even like FOURiphery that was too tame for us children in the band, so we needed to find something that was a middle ground between completely inappropriate and something that was a bit more tongue in cheek and fun so we landed on ‘Hail Stan’ which the name itself hopefully let’s people know that despite the seriousness of the level of hard work we put into the record and I guess in some ways how serious the music sounds, we as people in the band we do not take ourselves seriously whatsoever, we’re a bunch of goofballs and we definitely want that to come through despite the music itself.

What I love about Periphery is at one point I actually needed to check I was still listening to the same album because when ‘It’s Only Smiles’ came on I thought it jumped to a pop punk record on shuffle, now when the band comes up with a song like that what’s the vibe like when you come up with something that’s a little bit different?
We’re very open to it, I think that’s the beauty of being in this band at least is that we all feel completely uninhibited when it comes to presenting song writing ideas, just because the primary sound of ours is heavy, metal, whatever you want to call it, progressive metal, doesn’t mean we can’t inject other influences and other styles into it, and we all listen to tonnes of other styles of music, I’m a big fan of EDM, of pop music, of singer song writers, we all are, so I guess it comes down to to answer your question, if it’s a good song and we all agree that it’s something that we want to release then it goes on the record. It doesn’t matter what genre it might adhere to, we’ll figure out a way at least in our minds to make it fit on the record and whether it actually does or not that’s up to the listener to decide whether it works for them or not. For us we kind of like the idea of having a mixtape so to speak, a record that definitely has a vibe but doesn’t have to be any one particular genre or style or sound.

Every song on this album needs to be played live. So when do you think we’ll see you back in Australia?!
Oh man I hope sooner than later, I can say confidently that it is my favourite place to tour, it is my favourite place in the world to perform shows, so for me at least it’s always something that I’m pushing and I would love to get back down to Australia as soon as I possibly can. So hopefully from here forward within the next year we can get down there and play some shows again because I absolutely love everything about the country I love the people, I love the food, the fans of ours there are just great, great, great fans they are genuine, they are supportive, they are fun, the make the shows incredibly entertaining for us too. I don’t know I’ve just never had a bad experience in Australia and I cannot wait to come back. I think we all feel the same way, we love playing shows there.

In the ten years you’ve been in this band it can be easy to say what’s changed but what would you say is the one thing that’s stayed the same in your time in Periphery?
I think the core of us, you know the core group of band members and really this line-up has at the core been the same for a very long time now, we’re all remained very, very good friends, we’ve very much remained honest with each other and we’ve always pushed each other to communicate honestly because I think what comes with that camaraderie is our individual and collective dedication to the band, that’s never wavered so it’s forced us to communicate and figure out how to work together and be friends and live together on tour and live together in the studio and be productive together as a unit with so many different personalities. I think that’s the big thing that’s really been consistent which is the dedication and the need for us to make sure that we communicate and have fun and be friends, that’s really been the main kind of vibe.

On being a unit, I’ve spoken to Nolly a couple of times and obviously now he’s stepped aside, what are you doing in terms of the bass now?
So we really aren’t ever I think at least in the foreseeable future going to replace Nolly with another human being, for a lot of reasons I think it sort of stems from 1) we are a very tight strong unit and we don’t really want to have to worry about adding in another personality of human dynamic to the mix, but 2) we have such a great relationship with Nolly, he’s my business partner, he’s one of my best friends, he has at least for the foreseeable future he’s always agreed to work with us in performing the bass parts for our records and allowing us to use those tracks when we perform live. So when we play live it’s just the five of us and we’re running Nolly’s bass parts through backing tracks and we’re really OK with that, it still sounds good and I think the five of us *laughs* feel like five people is enough people to have on stage, we haven’t really felt any blow back from the fans in any way like it doesn’t feel like there’s anything missing, so yeah I think for now at least like I said for the foreseeable future we’re just gonna keep operating this way and continuing to work with Nolly in the recording process and that’s kinda the way it’s gonna be I think and it’s fun that way, it’s easy that way for us I like it.

Lastly let’s look ahead to the future, finish this sentence for me, by the end of 2019 Periphery would like to…
We would like to have an Australian tour on the books for 2020.